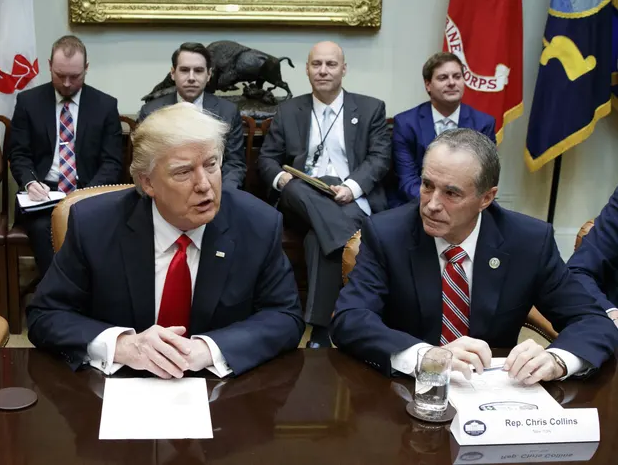 The Australian corporate regulator says it provided information to American authorities to assist in prosecuting an insider trading case against the Trump-supporting congressman Christopher Collins.

Collins, the first congressman to publicly support Donald Trump during the 2016 campaign, resigned on Monday ahead of an appearance in court on Tuesday when he was expected to plead guilty to insider trading charges related to an Australian biotech company where he was a director and one of the largest shareholders.

The company, Innate Immunotherapeutics, was developing a treatment for multiple sclerosis, but its share price plunged 92% in June 2017 when it revealed the drug had failed a crucial trial.

A spokesman for the Australian Securities and Investments Commission said the regulator provided data about trading in Innate, and other supporting information, to the US Securities and Exchange Commission and the Federal Bureau of Investigation.

Collins, a Republican from New York, allegedly learned of the trial’s failure on the evening of 22 June 2017, while he was attending a congressional picnic hosted by Trump on the South Lawn of the White House.

He and other board members were emailed the bad news by the company’s chief executive.

According to court documents, 15 minutes later Collins responded: “Wow. Makes no sense. How are these results even possible???”

It is alleged that within a minute of sending this email, Collins began calling his son Cameron, who also owned millions of Innate shares, to tell him the drug trial had failed.

According to court documents, father and son missed each other six times over four minutes, but eventually the call connected.

At the time, Australian investors were not able to buy or sell Innate stock on the ASX, where it was listed, because it had gone into a trading halt ahead of announcing the trial had failed.

However, early the following morning Cameron Collins, who has also been charged, allegedly began selling his stake on the US secondary “over the counter” or “pink slips” market.

He allegedly sold about 1.3m shares, avoiding about US$570,000 in losses when the company came out of its trading halt and the stock price tumbled.

Cameron Collins is also accused of tipping off his girlfriend and members of her family, none of whom are charged with any crime, that the drug had failed.

In a related civil case, the SEC claims it was Cameron Collins who convinced the family to get into the stock in the first place.

“I think we all need to consider investing in innate therapeutics,” his girlfriend told her mother in an August 2016 text message, court documents show.

“That is actually unheard of and cams dad almost guarantees it within the next 1 to 2 years,” she said in the text message.

In further text messages sent to her mother over the following days she said that “we’ll always keep in touch with cams dad who I’m guessing would know how things are looking as we get closer to the end of the trial”.

“I’ll make sure cams dad keeps us in the loop,” she said.

Collins resigned from the Innate board on 4 May last year.

The company, which has been contacted for comment, has changed its name to Amplia Therapeutics and is now working on cancer and fibrosis treatments.

Greggs to stockpile bacon and tuna to avert Brexit shortages