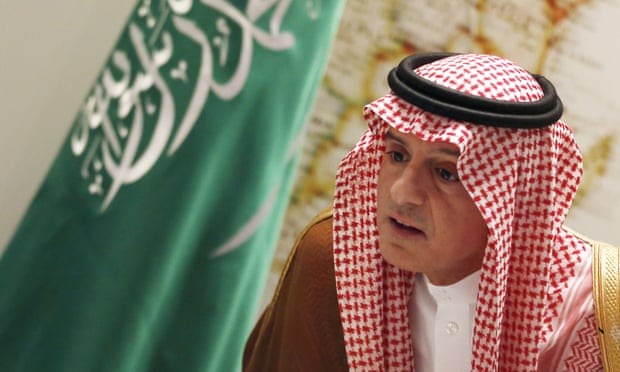 Saudi Arabia has said that US patience with Iran is not inexhaustible and warned that military options are still being considered following the attack on the Aramco oil facilities earlier this month.

The Saudi foreign affairs minister, Adel al-Jubeir, also said the UN-commissioned report into the origins of the attack will be available fairly soon, and described the EU’s Monday statement ascribing responsibility to Iran as “very significant”.

His remarks suggest Saudi Arabia is still putting private pressure on Donald Trump’s administration not to limit his response to the 14 September attack to further sanctions and the deployment of additional troops to defend the oil facilities.

Jubeir said: “We want to mobilise international support, and we want to look at a whole list of options – diplomatic options, economic options and military options – and then make the decision.”

Speaking on the margins of the UN general assembly in New York, he said: “This action will have consequences and Iran must know this.”

He added: “When push comes to shove, there comes a point when even America’s patience runs out – and Iran must be aware of that.”

The attacks temporarily knocked out more than 5% of global oil production and caused petroleum prices to rise.

Also at the UN, the French president, Emmanuel Macron, said on Tuesday he was hoping for a breakthrough with Iran over the possibility of reopening talks in the coming hours.

But the Iranian president, Hassan Rouhani, denied he was willing to drop his demand that US sanctions are lifted before talks can begin.

Macron told the general assembly: “I am not naive at all and I don’t believe in miracles. I believe it takes courage to build peace and that is why it is important for the United States, Iran and the signatories of the agreement to show this courage.”

The demand, he said was “no nukes, no missiles and no terrorism”, adding: “The Europeans were coming round to this being the objective. We believe appeasement does not work with Iran.

“We believe that when Europeans did not take a strong position after the attacks on the pipelines and oilfield in Shaybah [in August], this emboldened and encouraged Iran.”

Although Yemen’s Iran-backed Houthi rebels claimed responsibility for the attacks on the Abqaiq and Khurais facilities, Riyadh, Washington and the EU have laid the blame on Iran.

The US said it had expected Monday’s statement by the UK, France and Germany, stating that Iran was behind the attack, because European and US investigators are examining weapons fragments together in Saudi Arabia.

“I really appreciate that our allies … have come forward and recognised publicly the truth,” the US assistant secretary of state for the near east, David Schenker, told journalists.

“This did not come as a major surprise. The Brits and the French are on the ground with us, with the Saudis and the UN part of the investigative team in Saudi Arabia,” Schenker said.

“We have been transparent in terms of chain of custody … of all the equipment that we now have from the attack. And we’re exploiting it together.

“Even before we have finished this investigation, the evidence that is emerging is incontrovertible.”

The US has been insistent that it would not carry out a retaliatory strike, but would beef up Saudi defences and increase other forms of pressure on Iran.

Trump on Tuesday called on other nations to join the US in pressuring Iran after the attacks, but said there was still a path to peace.