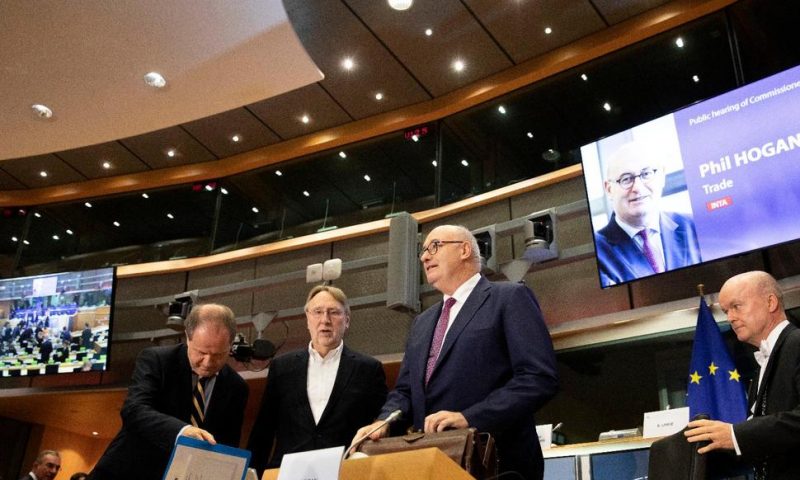 The man set to take over as the EU’s top trade official is urging the US not to launch an economically damaging tariff war with the bloc over subsidies to Airbus and Boeing.

BRUSSELS — The Irishman set to take over as the European Union’s top trade official on Monday urged the United States not to launch an economically damaging tariff war with the bloc over subsidies to Airbus and Boeing.

The World Trade Organization ruled in May that Europe illegally subsidized Airbus, hurting U.S. competitor Boeing. The WTO is set shortly to allow President Donald Trump to slap tariffs worth billions of euros on European products — including wine, cheese and olives — in response. The EU has brought a similar case at the WTO accusing the U.S. government of illegally subsidizing Boeing, and a ruling in its favor is expected, but is still months off.

“I would ask the United States to negotiate with us rather than having a tit-for-tat trade war that only does damage to both economies,” Phil Hogan told EU lawmakers at a hearing assessing his suitability for the post of EU trade commissioner. If endorsed by the European Parliament, he would take office along with the rest of the new European Commission team in November.

Hogan said “it doesn’t make sense” for the Trump administration to launch a tariff war “seeing that they’re going to have to deal with the issue if it goes badly wrong for them on Boeing.”

“Europe has to stand up for itself as well, in terms of the products that we will identify in return,” he added.

Trans-Atlantic trade tensions soared after Trump imposed tariffs of 25 percent on steel imports and 10 percent on imported aluminum from the EU last year. He said the move was to protect U.S. national security interests, but the Europeans claim it is simply protectionism and breaks global trade rules.

In response, the EU introduced “rebalancing” tariffs on about 2.8 billion euros ($3 billion) worth of U.S. steel, agricultural and other products. Trump has also threatened to slap duties on European automakers.

In an attempt to head off a tariff war, European Commission President Jean-Claude Juncker traveled to Washington to meet Trump, and a sketchy and very limited trade deal on industrial products emerged. But little progress has been made, and both sides accuse each other of dragging their feet.

Questioned by the lawmakers over how he would handle trans-Atlantic trade ties, Hogan said that “unfortunately we have not seen much movement on that agenda,” but, he insisted, “we must not lose sight of the big picture” given the huge volume of U.S.-EU trade.

Before Trump came to office, the Europeans had been trying for three years to conclude a more wide-ranging Trans-Atlantic Trade and Investment Pact with the United States. The pact was meant to lift trade barriers between the world’s biggest trading partners, spark sorely-needed economic growth and create new jobs.

Hogan also urged Washington to work with the Europeans on reforming the WTO, particularly its appellate body.

“We need the U.S. at the WTO,” Hogan said, but he added that “we have no indication whatsoever from the United States that they are willing to work with the European Union or any other partner in order to deal with the reform that’s necessary.”