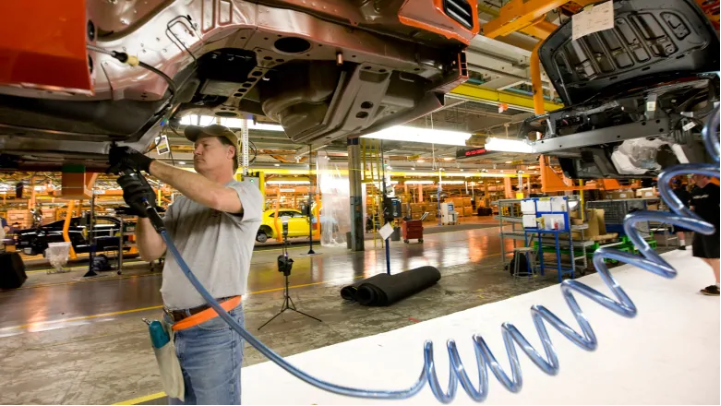 As 49,000 United Auto Workers in the U.S. strike against General Motors, there’s a risk the walkout could shut down GM Canada’s plants and auto-parts makers in Ontario.

And that means layoffs of some of GM’s 5,700 Canadian workers and others throughout the auto sector.

GM Canada says it is monitoring the situation closely for any impact to Canadian operations.

The North American auto industry is highly integrated, with assembly plants here in Canada reliant on parts coming from the U.S. and Mexico.

GM has three plants in Ontario — assembly plants in Ingersoll and Oshawa, and an engine and transmission plant in St. Catharines.

Because the auto supply chain is integrated, Canadian plants could soon be unable to continue working because of a shortage of parts. GM Canada did not say how soon Canadian plants might be affected.

But it could happen quickly. GM uses “just-in-time” delivery, which means hundreds of parts are moving across the border every day.

About 80 per cent of the engines St. Catharines is building are destined for cars assembled in the U.S., says Jerry Dias, president of Canadian union Unifor. Workers there could face layoffs within days, he told CBC News.

At the Ingersoll assembly plant, about half the engines they put in cars come from the U.S. Dias estimates they may have to halt operations within 10 days.

GM has not said how many days of parts it has in reserve.

It would be about two months before auto dealerships are affected by a shortage of product, according to the parent company.

Canadian workers are represented by a separate union, Unifor, and its contract schedule is different from the U.S. Contracts do not expire until September 2020 and September 2021.

But Unifor issued a statement on Sunday saying it “supports the UAW in negotiations for a fair contract settlement with General Motors.”

Dias says one of the big issues is how many jobs are being lost to Mexico with its very low wages.

“We had a dispute with GM in 2017 at the CAMI plant. We thought it would be quick, but it went on for almost a month.

“The issue was about General Motors’ decision to build the Equinox in Mexico. That is what is taking place in the U.S. GM announced the closure of four plants. They’re beefing up investment in Mexico and the workers in the U.S., like in Canada, have had enough.”

GM’s Oshawa assembly plant is set to close at the end of the year, one of five plants in North America that the auto giant is closing.

That is one of the key issues for the UAW in the U.S., which is pressing GM to schedule new models for the four U.S. plants it is closing.

Unifor has pressed GM Canada unsuccessfully to extend the life of the Oshawa plant, arguing the automaker made a commitment to at least 2020 when it accepted the 2008 government bailout.

GM is negotiating a shift toward more electric cars and investing heavily in automation, considered among the key trends in the auto industry.

North American car sales have boomed in the past three years, but are stagnating this year as young consumers put off owning vehicles.

But GM made $8 billion in profit in 2018 and the UAW is arguing it deserves a wage hike and better benefits to share in the good fortune.

Much depends on length of strike

It’s not just GM plants here in Canada, but also other auto-parts makers that could be affected.

The last strike by the UAW was in 2007, and it only lasted 17 hours, so there was not much impact on Canadian operations.

Before that a strike at just two major parts plants in Flint, Mich., in 1998 that lasted 54 days eventually shut down much of GM’s North American operations.

A long strike could have a big impact on Canadian workers. But it might not significantly affect the Canadian and U.S. economy.

If the strike lasts to the end of September, it would take only 0.1 per cent off annualized U.S. GDP growth in the third quarter, according to CIBC economist Avery Shenfeld.

“Impacts on Canada would be even more modest. Just to give a sense of scale, in the unlikely case where the strike lasts through [the fourth quarter] in its entirety, it would subtract a more meaningful 0.7 per cent off that quarter’s annualized pace in the U.S., and take a bit of a shine off Canada as well.”