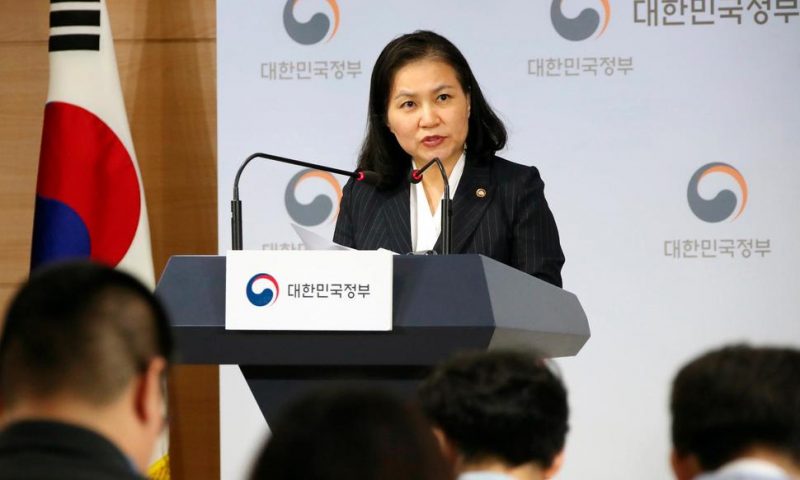 South Korea is initiating a complaint to the World Trade Organization over Japan’s tightened export controls on key materials South Korean companies use to make computer chips and displays.

South Korea, which has accused Tokyo of weaponizing trade to retaliate over political disputes, will formally request bilateral consultations with Japan on Wednesday as the first step in the WTO dispute settlement process, said Yoo Myung-hee, a senior official at South Korea’s Ministry of Trade, Industry and Energy.

She said the country is also considering whether to pursue WTO action over Japan’s move to delist South Korea as a preferential trade partner.

Japan in July imposed tighter export controls on three chemicals South Korean companies use to produce semiconductors and displays for smartphones and TVs, citing unspecified security concerns over South Korea’s export controls on sensitive materials that could be used for military purposes.

The measures, which weeks later were followed by Japan’s move to exclude South Korea from its “white list” of countries with fast-track trade status, triggered a full-blown diplomatic row that saw relations sink to a low unseen in decades.

Japan insists that all compensation matters were settled when the two countries normalized relations under a 1965 treaty and that the South Korean court rulings go against international law.

“Japan’s export restriction on the three materials were based on political motivation related to rulings by our Supreme Court on forced labor,” Yoo said at a news conference. “It was a discriminatory measure that directly targets only our country.”

“Regardless, it is clear that our action is consistent with the WTO,” he said.

Seko added that Tokyo would study the demands and respond according to the proper WTO procedures.

If Japan accepts South Korea’s request, the countries must hold consultations for a minimum 60 days. If Japan refuses the consultations or if the talks fail, South Korea could request a WTO panel ruling on the dispute. The process usually takes about 15 months but may also last years, said Jeong Hae-seong, a South Korean trade ministry official.

The measures Tokyo introduced in July require Japanese companies to receive case-by-case inspections and approval on the shipments of the three materials to South Korea, which takes up to 90 days, compared to the previous fast-track process that took one or two weeks, South Korean officials said. Yoo said Japan approved the shipments of the materials only three times since the measures took effect on July 4.

Following an angry reaction from Washington, Seoul later said it could reconsider its decision to end the military agreement, which remains in effect until November, if Japan relists South Korea as a favored trade partner.

China Keeps Penalties on US Pork, Soy, Eases Some Others