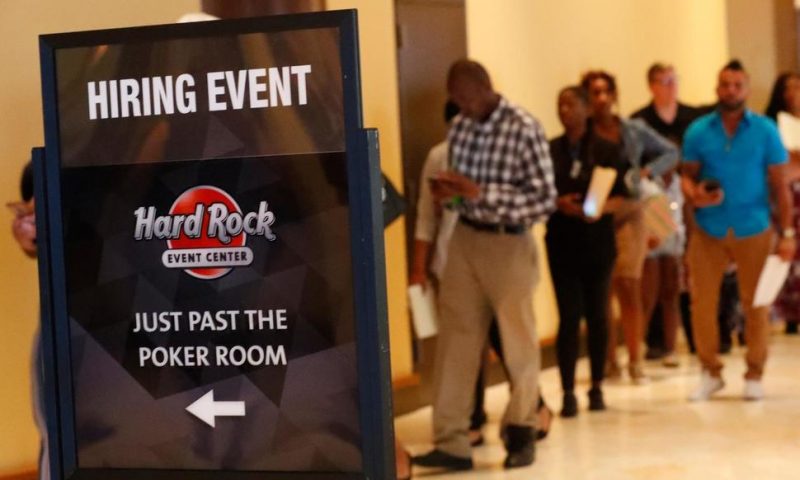 US job openings slipped 0.4% in July, while total hiring ticked up.

WASHINGTON — The number of open U.S. jobs slipped 0.4% in July, while hires climbed slightly, a sign that some employers may be growing cautious amid rising economic uncertainty.

The Labor Department said Tuesday that employers advertised 7.22 million available jobs in July, down from a revised 7.25 million in June. Job openings reached a peak of 7.6 million last November but have fallen by about 400,000 since then. This is the second consecutive month in which job openings have declined.

Still, total hiring edged up to 6 million. The number of quits, which tends to increase when people are confident in the prospect of finding a new job, rose to 3.6 million.

The figures point to a largely healthy job outlook, said Daniel Silver, an economist at JPMorgan Chase Bank, in a note to clients.

“Like many other recent labor market indicators, the JOLTS report signals that job market conditions are reasonably healthy, but that they are not as upbeat as they were at some earlier stages of the expansion,” Silver said.

After U.S. employers added a modest 130,000 jobs in August, some economists view the declining job openings as a sign of weakness for the labor market.

“Last week’s jobs report sparked a debate over whether the slowdown in hiring is due to an economy hitting full employment, but today’s JOLTS report indicates that this is actually a labor market that is losing momentum,” said Nick Bunker, an economist at jobs site Indeed.

There are 1.2 job openings for every unemployed person, suggesting that many businesses still remain hungry for workers. Additional hiring could be especially significant in fueling consumer spending, which is the primary driver of economic growth.

Apple Rolls Out New Streaming TV Service for $5 a Month