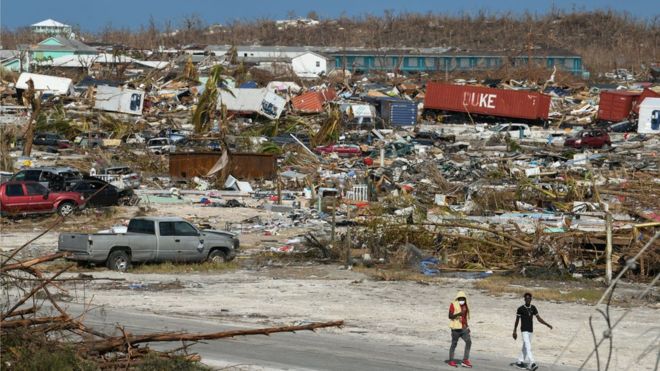 Head of the US Agency for International Development (USAID) has compared the damage from Hurricane Dorian in the Bahamas to that of a nuclear bomb.

Mark Green said he had taken a flight to observe the damage caused by the storm on Grand Bahama and the Abacos islands.

So far 43 people are confirmed dead however the number is expected to rise.

Mr Green told Reuters news agency: “I was struck by the focused nature of the devastation.

“There are parts of Abaco and the Bahamas that don’t show a great deal of damage, and then there are clusters and communities that were devastated, almost as though nuclear bombs were dropped on them.”

USAID says it is working with the government of the Bahamas to provide emergency shelter, medical care, food and water.

Thousands of evacuees are fleeing Abaco for Nassau. A number of passenger planes, cruise liners and government boats and ships have arrived to transport evacuees to Nassau, the Bahamas’ capital, and Florida.

About 3,500 people have been evacuated to Nassau so far. On Saturday, a cruise liner carrying 1,400 people docked in Riviera Beach, Florida.

Officials have acknowledged that Nassau will struggle to house all of the people requiring shelter.

According to the United Nations’ World Food Programme, some 70,000 people are in need of food and shelter. The islands have a population of about 400,000.

In Marsh Harbour in the Abacos, 90% of infrastructure is damaged or destroyed.

The prime minister said supplies of food and water were adequate.

However there is anger among some people in Abaco against their government for failing to provide enough help.

“We’ve had to funnel gasoline out of destroyed cars to get injured people back and forth. There’s no food, no medicine and no water,” said one resident of Marsh Harbour, Tepeto Davis,

The US Coast Guard and Navy are shipping in relief supplies.

Hurricane Dorian has diminished into a post-tropical cyclone. On Saturday, it smashed into the Canadian province of Nova Scotia, toppling trees and cutting power to more than 450,000 homes.