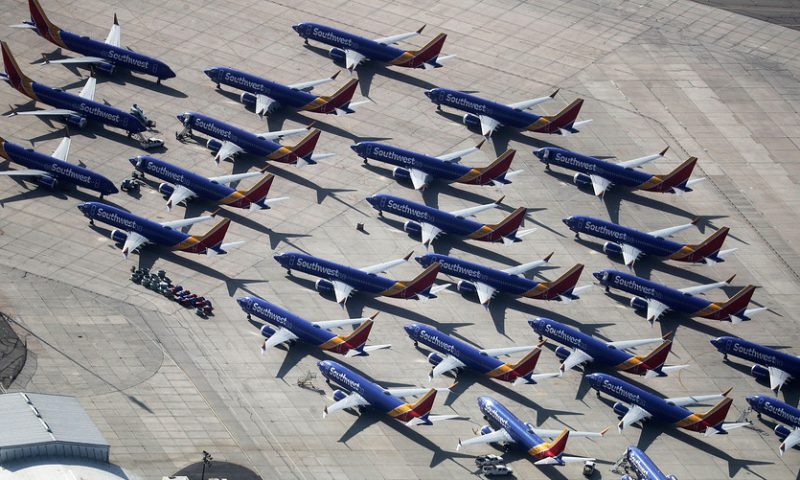 Boeing delivers a 98-point jolt to the Dow

A rise in Boeing Co. stock helped to support the Dow index on Thursday, but the broader market slipped following a survey suggesting the U.S. manufacturing sector was now contracting, while longer term bond yields slid below short term yields again, suggesting the economy was weakening.

Some Federal Reserve officials also disappointed investors hoping for confirmation that policy makers will cut interest rates again next month, but the focus on Friday will be on a speech by Fed Chairman Jerome Powell at the Jackson Hole conference in Wyoming.

How are the major benchmarks faring?

All three benchmarks finished well off their worst levels of the session, after the Dow at one moment fell by 186 points.

However, Kansas City Fed President Esther George and Philadelphia Fed President Patrick Harker, said on CNBC that they would like to hold interest rates steady.

Of that group, only George is a voter on the Fed’s rate-setting Federal Open Market Committee this year but their commentary points to a divergence of opinion around monetary policy that Powell will need to reconcile when the Fed next gathers Sept. 17-18.

Powell will deliver a closely watched speech on the challenges facing monetary policy at 10 a.m. Eastern Time on Friday.

Stock-market investors were on edge after the yield on the 10-year U.S. Treasury note TMUBMUSD10Y, +1.47%  briefly fell below that of the 2-year Treasury noteTMUBMUSD02Y, +0.99%, again Thursday. This so-called inversion of the yield curve is seen as an accurate predictor of recessions.

The fall in longer dated yields occurred after IHS Markit issued its latest purchasing manager’s index readings for the U.S. manufacturing sector which showed factory activity slipping into contraction territory with a reading of 49.9 in August, from 50.4 in July, to a 10 year low, while the services sector slowed to 50.9 in August from 53.0 in July, a 3-month low.

“You had a couple things helping drive markets lower this morning,” Mike O’Rourke, chief market strategist at JonesTrading told MarketWatch. “You have the yield curve inversion, the yuan weakening again overnight and at 9:45 we had the manufacturing print that missed estimates and was below 50,” he said.

Data from the Conference Board and on job market were more upbeat, with a report on leading economic indicators index rising 0.5% in July to 112.2, while data on new applications for unemployment benefits fell by 12,000 to 209,000 during the week ended Aug 17, a four-week low, suggesting continued strength in employment.

Elsewhere, the European Central Bank hinted at a significant new stimulus package after the release of minutes from its July 25 meeting, which suggested that policy makers are contemplating a package that would includes cutting policy rates further into negative territory and new purchases of financial assets.

Shares of Boeing Co. BA, +4.24%  rallied 4.2% after a positive note from analyst Cai von Rumohr, said the Federal Aviation Administration certification flight for the embattled 737 MAX plane could be four or six weeks away, a boon to the aeronautics and defense contractor which has been under pressure since that fleet was grounded world-wide back in March following a pair of fatal crashes.

Nordstrom Inc. JWN, +15.86%  issued second-quarter financial resultsWednesday after the close, beating Wall Street expectations for sales and earnings, though it slightly lowered its outlook for the full year. The retailer’s stock rose 15.9% Thursday.

Mastercard Inc. MA, -0.44% shares edged down 0.4% after it said it was investigating a data breach of a loyalty program in Germany, which compromised personal information.

These 4 big blue chip stocks are cheap for a reason, cautions money manager