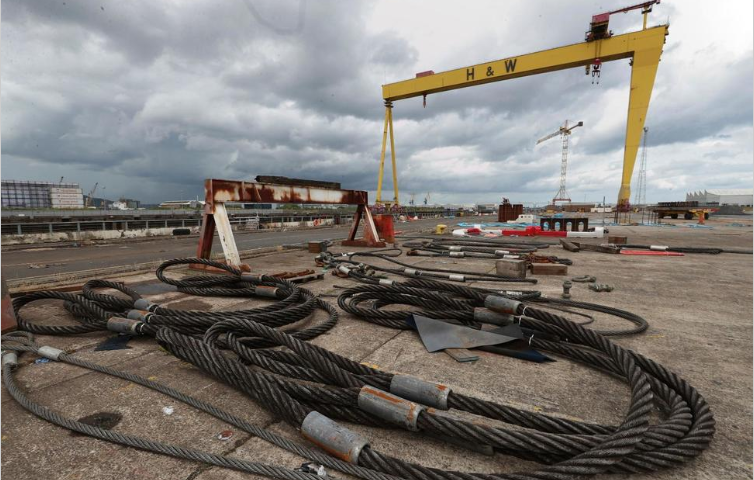 Harland and Wolff, the Belfast shipyard that built the Titanic, is facing administration.

LONDON — The Belfast shipyard that built the Titanic has called in administrators after last-ditch efforts failed to rescue a company that had once typified Britain’s industrial might.

Harland and Wolff appointed BDO as administrators after its Norwegian parent company, Dolphin Drilling, failed to find a buyer, union officials said. An insolvency hearing is set for Tuesday.

The shipyard was best known for constructing the doomed White Star liner, Titanic, which sank on its maiden trans-Atlantic voyage in 1912 after striking an iceberg. But the firm was one of U.K.’s key industrial producers during World War II, building some 150 ships. Its massive yellow cranes, Samson and Goliath, are considered landmarks of Belfast — a point of pride.

It once boasted a workforce of 30,000, but now employs only about 125, though it supported hundreds of other jobs in its supply chain.

Shipyard workers vowed to occupy the shipyard until heavy industry and shipbuilding could be secured, but the government so far has declined to intervene. Union officials blame Prime Minister Boris Johnson and his Conservative government, accusing them of having no coherent plan to safeguard manufacturing jobs.

“The future of Harland and Wolff is more than a ‘commercial issue’ that the prime minister can stand by and do nothing about,” said Michael Mulholland, an organizer for the GMB union. “But we will not give up on this famous shipyard. The occupation will continue and our battle will continue.”

In recent years, the shipyard has diversified to work on cruise liner retrofits and wind energy projects.