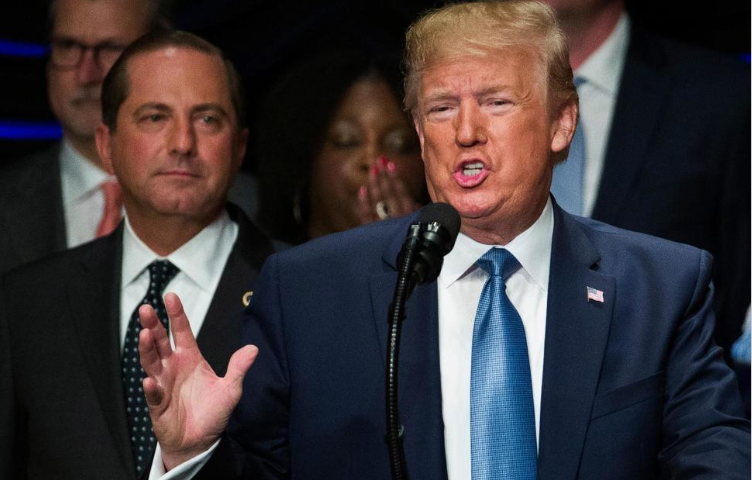 The Trump administration says it will create way or Americans to legally import lower-cost prescription drugs from Canada.

WASHINGTON — The Trump administration said Wednesday it will create a way for Americans to legally and safely import lower-cost prescription drugs from Canada for the first time, reversing years of refusals by health authorities amid a public outcry over high prices for life-sustaining medications.

The move is a step toward fulfilling a 2016 campaign promise by President Donald Trump. It weakens an import ban that has stood as a symbol of the political clout of the pharmaceutical industry.

But it’s unclear how soon consumers will see benefits, as the plan has to go through time-consuming regulatory approval and later could face court challenges from drugmakers. And there’s no telling how Canada will react to becoming the drugstore for its much bigger neighbor, with potential consequences for policymakers and consumers there.

The U.S. drug industry is facing a crescendo of consumer complaints over prices, as well as legislation from both parties in Congress to rein in costs, not to mention proposals from the Democratic presidential contenders. Ahead of the 2020 election, Trump is feeling pressure to deliver on years of harsh rhetoric about pharmaceutical industry prices.

“The landscape and the opportunities for safe linkage between drug supply chains has changed,” Azar said. “That is part of why, for the first time in HHS’s history, we are open to importation. We want to see proposals from states, distributors, and pharmacies that can help accomplish our shared goal of safe prescription drugs at lower prices.”

Stephen Ubl, president of the industry group Pharmaceutical Research and Manufacturers of America called the plan “far too dangerous” for American patients. “There is no way to guarantee the safety of drugs that come into the country from outside the United States’ gold-standard supply chain,” Ubl said in a statement. “Drugs coming through Canada could have originated from anywhere in the world.”

Most patients take affordable generic drugs to manage conditions such as high blood pressure or elevated cholesterol. But polls show concern about the prices of breakthrough medications for intractable illnesses like cancer or hepatitis C infection, whose annual costs can run to $100,000 or much more. And long-available drugs like insulin have seen serial price increases that forced some people with diabetes to ration their own doses.

Azar, a former drug company executive, said U.S. patients will be able to import medications safely and effectively, with oversight from the Food and Drug Administration. Azar used to be a skeptic of importation, and was once quoted dismissing it as a gimmick.

One prong of the administration’s proposal would allow states, wholesalers and pharmacists to get FDA approval to import certain medications that are also available here. Trump had recently endorsed a new Florida law to allow importation.

Another part of the plan would allow drugmakers to seek approval for re-importation of their own drugs. This second provision would cover cutting-edge biologic drugs as well mainstays like insulin, and it could apply to drugs from other countries besides Canada.

Azar said complex regulations setting up the system could take “weeks and months.” He called on Congress to pass legislation that would lend its muscle to the effort, making it harder to overturn the policy in court.

“The FDA has the resources to do this,” said acting FDA Commissioner Ned Sharpless. “The agency is interested in considering any reasonable proposal that maintains the bedrock of safety and efficacy for the American consumer.”

Importation has backers across the political spectrum.

Sen. Chuck Grassley, R-Iowa, chairman of the panel that oversees Medicare, is a longtime supporter. He and Democratic presidential candidate Sen. Amy Klobuchar of Minnesota have a bill to facilitate importation. Sen. Lamar Alexander, R-Tenn., who chairs the health committee, welcomed the plan but said the key is whether importation can be done safely.

During Tuesday night’s Democratic presidential debate , multiple candidates talked about the need to lower drug costs. Sen. Bernie Sanders, Vermont Independent, noted the disparity in U.S. and Canadian prices. “I took 15 people with diabetes from Detroit a few miles into Canada and we bought insulin for one-tenth the price being charged by the crooks who run the pharmaceutical industry in America today,” he said.

The leading drug industry trade group, known as PhRMA, is a powerhouse that generally gets its way with lawmakers. It spent $128 million on lobbying in 2017, according to its most recent tax filings. But pressure on the industry is rising across many fronts.

In the Senate, Trump is supporting Grassley’s bipartisan bill to cap medication costs for Medicare recipients and require drugmakers to pay rebates to the program if price hikes exceed inflation. Democrats in the House are pressing for a vote on a bill allowing Medicare to directly negotiate prices on behalf of millions of seniors. Separately, the Trump administration is pursuing a regulation that would tie what Medicare pays for drugs administered in doctors’ offices to lower international prices.

Drug costs are lower in other economically advanced countries because governments take a leading role in setting prices. But in the U.S., Medicare is not permitted to negotiate.

Some experts have been skeptical of allowing imports from Canada, partly from concerns about whether Canadian suppliers have the capacity to meet the demands of the much larger U.S. market.

Backers argue that the prospect of competition will pressure U.S. drugmakers to reduce prices.