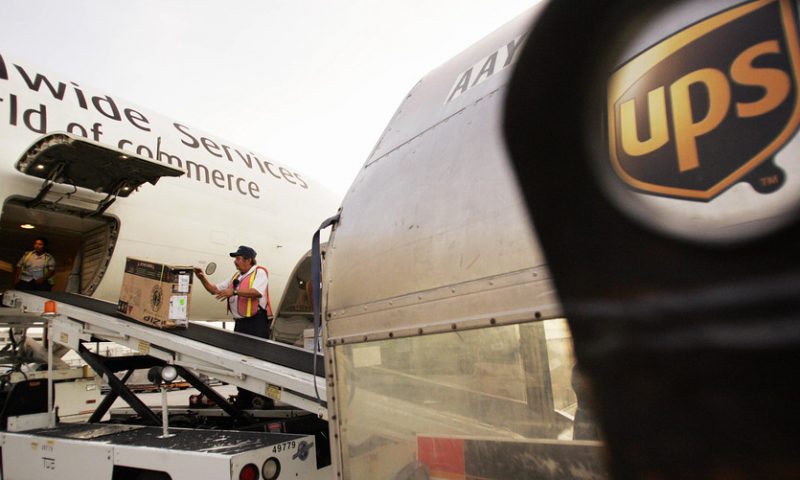 Shares of United Parcel Service Inc. rocketed toward their best one-day gain in a decade after the package delivery giant reported profit and revenue rose above expectations, as the company’s next-day air service took business from its rivals’ two-day offerings.

The fact that UPS affirmed its full-year earnings outlook helped assuage fears that continued trade uncertainty and a slowing global economy in the face of increased costs, and the threat of increasing competition, would drag on future results. Read more about UPS’s comments on trade uncertainty.

The stock UPS, +8.66% jumped 8.9% in afternoon trading, to put it on track for a fifth straight gain, as volume swelled to more than triple the full-day average.

The rally would be the biggest one-day percentage gain since the stock shot up 9.4% on Oct. 28, 2008. On that same day, the Dow industrials recorded its third-best point gain in its history of 889 points, and 7th-best percentage gain of 10.9%, while the Dow transports rose 6.2%.

Chief Executive David Abney said on the post-earnings conference call with analysts that Next Day volume was “the strongest growth in more than a decade,” helping accelerate air market share gains. While he wouldn’t say what companies the new next-day business came from, he said it was coming at a time the company was boosting capacity to take advantage of a “structural change” in e-commerce deliveries.

“[T]he timing of our actions couldn’t be better, with the largest e-commerce shippers adopting next day and often moving from our competitors’ 2-day options to our 1-day options,” Abney said, according to a transcript of the conference call provided by FactSet.

When Bank of America analyst Ken Hoexter asked if the market share gains were coming from the U.S. Postal Service or because FedEx Corp. FDX, +1.29% canceled its FedEx Express U.S. domestic contract with Amazon.com Inc. AMZN, +0.32% Chief Sales and Solutions Officer Kate Gutmann answered by saying the air business has been growing “across a broad base of customers, and we expect even more to go.”

Analyst David Vernon at Bernstein wrote in a research note emailed to clients: “The growth of Next Day Air runs counter to the thesis that Amazon has the capacity to do all this work themselves, which is bullish, but the investment in capacity required to meet this growth will raise questions on the sustainability of the share gain.”

The Next Day growth did come at a cost, as revenue per price fell 8.9% to $18.30, while overall U.S. domestic package revenue per piece increased 0.5% to $10.12. Peretz said on the call that next-day yields were lower, “due to higher growth with large customers and end of day saver products.”

Cowen analyst Helane Becker raised her stock price target to $120 from $116, while keeping her rating at market perform. She said investors should view the affirmed guidance “favorably,” as it comes in the face of “lingering macro headwinds” and increased costs from the expansion of next-day ground delivery services.

Meanwhile, UPS’s international business showed some weakness, as second-quarter revenue fell 2.7% to $3.51 billion, to miss the FactSet consensus of $3.66 billion. The company said on the conference call that trade headwinds are “growing,” at a time that global industrial production and exports are slowing.

Also, supply chain and freight revenue declined 3.1% to $3.39 billion, below expectations of $3.50 billion.