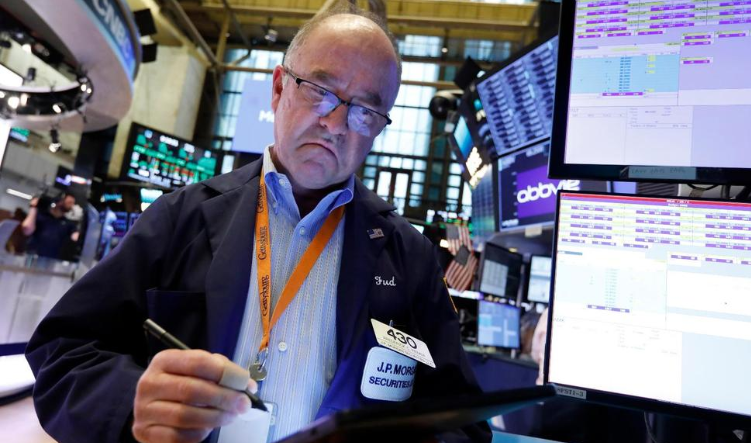 U.S. stock indexes sloshed between small gains and losses Friday after Microsoft, American Express and other big companies offered up a mixed set of earnings reports.

U.S. stocks pulled further back from their records on Friday to cap the weakest week for the S&P 500 since May.

Indexes sloshed between small gains and losses for much of the day before turning lower in the afternoon after Iran said it seized a British oil tanker, the latest escalation of tensions between Tehran and the West. Reined-in expectations for how deeply the Federal Reserve will cut interest rates at its next meeting also weighed on stocks.

Momentum for stocks has slowed since early June, when they began soaring on expectations that the Federal Reserve will cut interest rates for the first time in a decade to ensure the U.S. economy doesn’t succumb to weaknesses abroad. The Fed’s next meeting is scheduled for the end of this month.

Late Thursday, Treasury yields sank after comments by Fed officials raised expectations that it may cut rates by half a percentage point, rather than the typical quarter point. But yields climbed Friday as the market grew more convinced that the Fed will cut just 0.25 percentage points on July 31.

“It could be 25 wasted,” said Brent Schutte, chief investment strategist at Northwestern Mutual Wealth Management Company, who said a half-point cut would be more effective. “I think it’s more important to shock the market a bit and convince the market they’re serious about pushing inflation above 2%.”

Until the Fed’s meeting, investors are focusing on whether companies can top the meager expectations Wall Street has for the profits they made during the spring.

Microsoft jumped in morning trading after reporting stronger earnings for April through June than analysts expected, though it faded as the afternoon progressed and ended the day with just a 0.1% gain.

Several banks climbed after reporting stronger-than-expected earnings, but financial stocks in the S&P 500 were down overall. That was partly because of a 2.8% drop for American Express, which reported stronger earnings for the latest quarter than analysts forecast but did not raise its forecast for full-year earnings.

“The biggest overall trend is if you beat, you may be mildly rewarded, and if you miss, you are going to get pounded,” said J.J. Kinahan, chief market strategist for TD Ameritrade.

Energy stocks had the biggest gains in the S&P 500 after the price of oil climbed on worries about possible supply disruptions.

Britain’s foreign secretary said Iranian authorities seized two vessels in the Strait of Hormuz, one British-flagged and the other under Liberia’s flag. The move comes two days after the United States said it downed an Iranian drone in the strait, which is a key waterway for moving oil.

Boeing had one of the biggest gains in the S&P 500, even though it said it will take a $4.9 billion charge to cover possible compensation it will pay airlines following the grounding of its 737 Max jet. That’s a huge number, analysts concede, but it may provide some certainty to investors who had worried the payments could be much higher. Boeing also said the figure assumes its 737 Max jets return to service later this year, which would be earlier than some investors thought.

Plastic or Paper? Trump Campaign Weighs in on Straw Debate