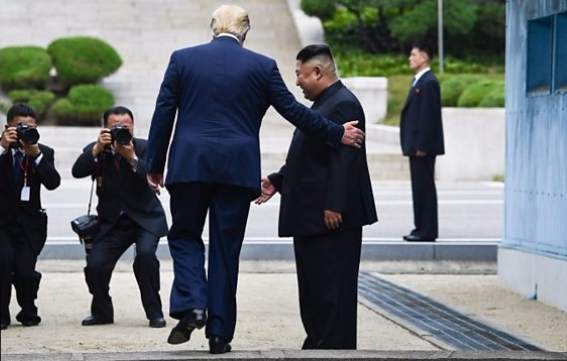 Donald Trump has become the first sitting US president to set foot in North Korea, after meeting Kim Jong-un in the area dividing the two Koreas.

Mr Trump and the North Korean leader posed for handshakes before talking for nearly an hour in the heavily fortified demilitarised zone (DMZ).

Both countries agreed to set up teams to resume stalled nuclear talks.

Their last summit broke down in February with no progress on denuclearisation in North Korea.

Critics have dismissed the occasion – the two leaders’ third face-to-face encounter in just over a year – as a political theatre and say North Korea still needs to show that it is serious in getting rid of its nuclear weapons.

What happened at the DMZ?

In a meeting apparently arranged after Mr Trump invited Mr Kim on Twitter on Saturday, they shook hands across the demarcation line between the Koreas before Mr Trump briefly crossed into North Korea, a symbolic milestone.

“Good to see you again. I never expected to meet you at this place,” a smiley Mr Kim told Mr Trump through an interpreter in an encounter broadcast live on international television.

Looking relaxed, Mr Kim crossed into South Korea and alongside Mr Trump said: “I believe this is an expression of his willingness to eliminate all the unfortunate past and open a new future.”

The encounter had initially been billed as a short greeting but Mr Trump and Mr Kim ended up talking for almost an hour in a building known as the Freedom House, on the South Korean side.

Speaking next to Mr Trump in a rare statement to the press, Mr Kim said the meeting was a symbol of their “excellent” relationship.

Calling their friendship “particularly great”, Mr Trump – who once referred to Mr Kim as “little rocket man” – said it was a “great day for the world” and that he was “proud to step over the line” between the Koreas.

North Korean media have yet to mention the talks – including in the 20:00 (11:00 GMT) Korean Central TV bulletin – although typically they wait until the next day to report on the news.

Have other US presidents visited?

A number have been to the armistice line that has divided the peninsula since the Korean War ended in 1953, largely to show support for the South.

Both Jimmy Carter and Bill Clinton have been to North Korea, flying into the capital, Pyongyang, but only after they left office.

Barack Obama wore a bomber jacket and binoculars for his visit to the armistice line. Mr Trump changed the optics, opting for a business suit.

What to make of the meeting?

Negotiators from the two countries will meet in the next weeks to resume discussions about North Korea’s nuclear programme, Mr Trump told reporters, saying he was “not looking for speed [but] looking to get it right.”

Sanctions on North Korea, he added, would remain in place though he appeared to leave open the possibility of easing them as part of the talks. Mr Trump also said he had invited Mr Kim to visit Washington.

But analysts have questioned whether the meeting will result in any substantive progress.

“This whole meme is just another Trump snow-job of flim-flam. Does anyone seriously believe Kim will give up even one warhead [because] Trump is his bud?,” said Robert Kelly, professor of political science at Pusan University in South Korea.

Sue Mi Terry, who served as a US National Security Council aide specializing in Korean affairs, said the meeting could result in progress if Mr Trump shows he is willing to accept a partial accord rather than a comprehensive deal.

“I do think Kim could offer just enough on the negotiating table such as the Yongbyon nuclear facility plus yet another suspected nuclear facility in order to secure an interim deal with Trump and at least some sanctions relief,” she told the New York Times.

But Pope Francis has praised the meeting, saying it was a “good example of the culture of encounter”.

How are US-North Korea relations?

Negotiations with North Korea to try to convince it to abandon its controversial nuclear programme reached a peak last year when Mr Trump and Mr Kim had a historic meeting in Singapore.

They both committed to the “complete denuclearisation” of the Korean peninsula, but without clarifying what that meant.

It was hoped their second meeting, in Hanoi in February, would make some concrete agreement about North Korea handing over its nuclear programme in exchange for some of the tight sanctions against it being lifted.

But those talks ended with no deal, as they failed to agree on the pace at which sanctions should be eased. Since then the negotiations have stalled, though Mr Kim and Mr Trump have exchanged letters recently.

Syrian refugees forced to destroy their own homes in Lebanon