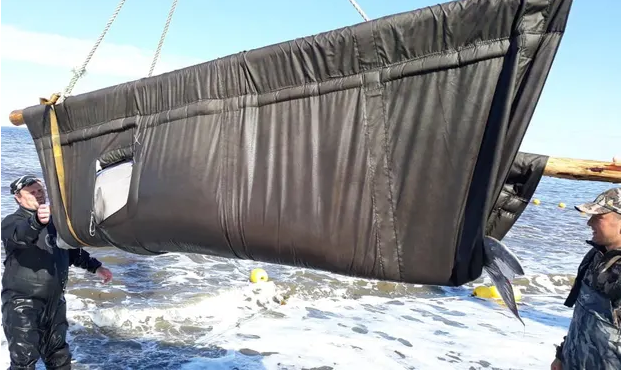 Greenpeace criticises long-awaited operation, saying it risked trauma or death for the animals

Russia’s long-awaited operation to release the first batch of whales held in cramped enclosures in the country’s far-east region was dangerously flawed, environmentalists have said.

The animals – 11 orcas and 87 beluga whales – have been held in captivity in a bay near the port city of Nakhodka since last year. They were due to be sold to Chinese oceanariums, before images of the animals languishing in the “whale prison” caused an international outcry.

Vladimir Putin last week hailed Russia’s moves to return the whales to the wild. However, Greenpeace Russia said the two orcas and six beluga whales were simply dumped into the Sea of Okhotsk on Thursday after being transported 1,100 miles by truck and then boat to their natural habitat. The journey took seven days and the whales were held in small containers the entire time.

The decision to free the animals came after a visit to their pens in April by Jean-Michel Cousteau, an oceanographer and son of the late marine expert Jacques Cousteau. Yet despite promises by Russian officials that Cousteau’s team of maritime experts would be involved in their release, no international or independent scientists were invited to take part. Cousteau had recommended that the whales be transported only by sea.

Greenpeace said no attempt was made to prepare the whales for their return to the wild, seriously raising the risk of trauma or death for the animals. It also said that the entire operation was carried out in secrecy.

“It’s cruel to release orcs and beluga whales who have spent seven days in these containers straight into the sea,” Oganes Targulyan, a Greenpeace expert, told Russian media. “They weren’t released, but dumped [into the sea].”

Russian officials said the operation had been successful, and that none of the whales suffered during the journey. Nine orcas and 81 beluga whales remain in captivity. They will be freed in batches over the next four months.

A court in Russia’s far east this month ordered a number of companies to pay fines totaling 150.2m roubles (£1.8m) for their roles in the “whale prison”. But according to documents published on Russia’s state procurement website, the same companies were also hired by the state fisheries and oceanography institute to release the whales. They stand to earn more than 360m roubles in total.