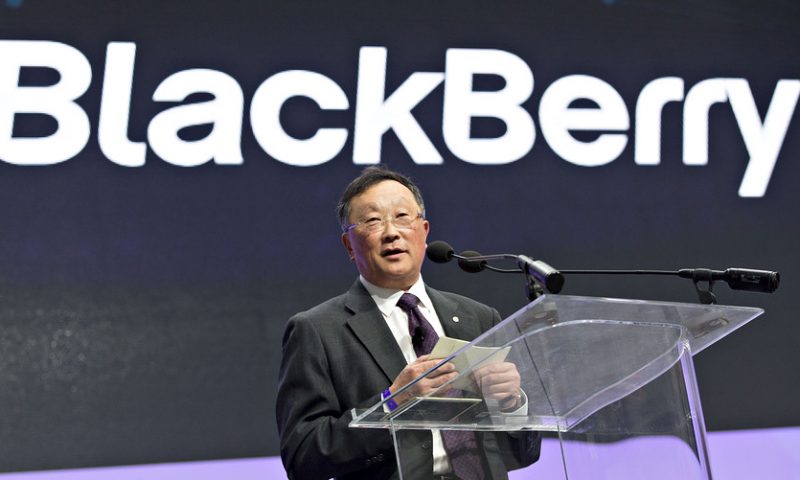 Cybersecurity company is using an adjusted revenue number that is not allowed by the SEC; stock drops toward 5-month low

BlackBerry Ltd. reported fiscal first-quarter earnings on Wednesday that led with and were dominated by non-standard numbers, putting the company at risk of an enforcement action from the U.S. Securities and Exchange Commission.

The headline on the earnings release highlights the cybersecurity company’s non-GAAP revenue, or revenue that does not conform with Generally Accepted Accounting Principles, a metric the regulator does not allow.

It then proceeds to list four non-GAAP measures, including other non-GAAP revenue numbers, along with their corresponding GAAP measures, but the exclusive focus on non-GAAP over standard numbers is also not allowed by the SEC.

Under SEC rules, companies must lead with their GAAP numbers. They are allowed to add non-GAAP metrics, which many companies say give a truer picture of underlying earnings. But they must give equal prominence to the two sets of numbers and offer a full reconciliation of the two.

Waterloo, Ontario-based BlackBerry BB, -8.81% explained its adjusted revenue in a footnote: “During the first quarter of fiscal 2020, the Company recorded software deferred revenue acquired but not recognized due to business combination accounting rules of $20 million, of which $19 million was included in BlackBerry Cylance and $1 million was included in IoT (Internet of Things).”

In other words, the security software company is adding in revenue that will never be allowed under GAAP as the result of an acquisition.

The stock tumbled 8.6% in active afternoon trading, to put it on track for a 5-month closing low. Trading volume topped 14.1 million shares, more than triple the full-day average.

Many news services reported the higher number early Wednesday, suggesting the company had beaten Wall Street estimates on revenue, when it had not. The company posted a net loss of $35 million, or 9 cents a share, in the quarter to May 31, narrower than the loss of $60 million, or 11 cents a share, posted in the year-earlier period. It’s adjusted per-share number was 1 cent, ahead of the FactSet consensus for breakeven.

Looking back at the company’s annual report for the year to Feb. 28, 2019 shows it adjusted for software deferred revenue of approximately $12 million that was acquired but not allowed to be recognized last year due to business combination accounting rules. That means BlackBerry has made a larger adjustment to revenue in the first quarter than for all of last year.

BlackBerry added to its explanation of the revenue adjustment in another footnote: “During the first quarter of fiscal 2020, the Company recorded deferred commission expense on acquired but not recognized due to business combination accounting rules of approximately $5 million.”

In other words, the company also adjusted its numbers to recognize commission expense on the $20 million of revenue it added back in—even though it will never recognize either sum on its own books.

The company’s head of corporate communications Sarah McKinney responded to MarketWatch questions on the matter with this statement:

“We understand, and report our results in full compliance with, the securities laws and regulations that apply to us as a foreign private issuer, including rules regarding the use of non-GAAP measures. In particular, we present our comparable GAAP and non-GAAP results immediately side-by-side in our press releases, giving them equal prominence, and we provide full reconciliations as we are required to do.

“We have been consistent in this approach for many quarters and we believe that our presentation of these non-GAAP measures provides management and shareholders with important information regarding the our financial performance,” McKinney wrote in emailed comments.

But many companies have been called out by the SEC in recent years for these very practices, some requiring more than one push and fines from the regulator to get it right, as MarketWatch has reported.

In late 2018, Symantec stock SYMC, +0.29% dropped dramatically when it revealed an investigation related to “the company’s public disclosures including commentary on historical financial results, its reporting of certain non-GAAP measures including those that could impact executive compensation programs, certain forward-looking statements, stock trading plans and retaliation.”

The company was doing the same thing as BlackBerry, adding back revenue writedowns from acquisitions to GAAP revenue numbers that made their numbers look better.

Symantec is now defending a class-action lawsuit regarding these allegations and recently received several comment letters from the SEC on the disclosures. The SEC’s investigation of the company continues.

MarketWatch similarly reported last year that ADT Inc.’s ADT, +2.04% use of non-GAAP metrics was confusing to investors as it made that company’s numbers look better. The SEC agreed, and hit the commercial and residential security company with a $100,000 fine last December, ordering it to cease and desist promoting nonstandard metrics in its earnings. (Just three months later, the company was back using them again, even encouraging journalists to make a calculation to create a metric that the SEC has banned and that makes a loss look like a profit.)

Back in 2016, the year the SEC began a proper crackdown on the overuse of non-GAAP numbers with a set of updated guidelines, it wrote to FedEx Corp. FDX, +2.53% more than once to tell the company it was not meeting reporting requirements related to non-GAAP disclosures. The company responded to say it had made significant “proactive” changes tin its fiscal fourth-quarter earnings release. However, the SEC had to write again to say that those changes were not enough.

Rosanna Landis Weaver, program manager for CEO pay issues at As You Sow, a non-profit that promotes corporate social responsibility, told MarketWatch about BlackBerry, “It is outrageous to add back revenue that will never be recognized by GAAP or have anyone paid on the basis of non-GAAP revenue rather than real numbers.

“How can they justify recognizing expense for commissions on revenue they will never recognize in GAAP?” she said.

Shocker: The S&P 500 is underperforming the stock market