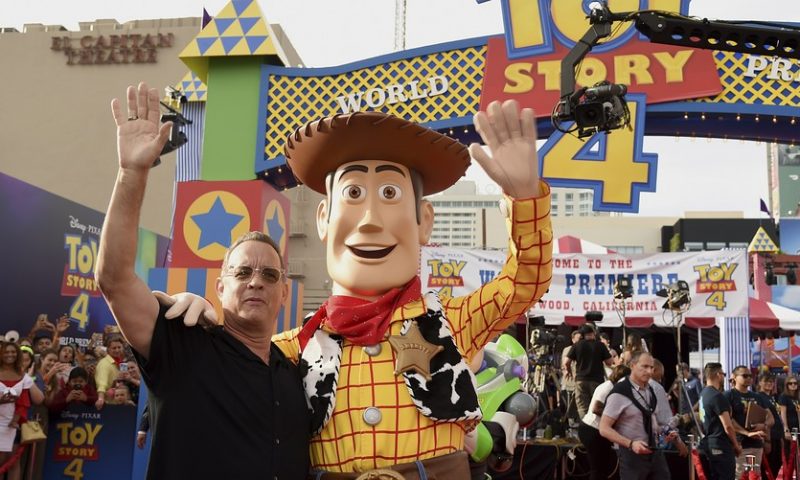 Still, its estimated gross missed the robust haul that many analysts were projecting, with some estimates closer to $135 million as the film was played in 4,575 North American theaters.

An $120 million start at the international box office, however, boosts the overall traffic picture for the studio DIS, -1.26% .

The domestic result only slightly improves upon the $110 million debut of “Toy Story 3” in 2010, the Wall Street Journal said. In fact, adjusted for inflation, the film came in at about $129 million in today’s dollars.

That previous sequel, though, performed well in the subsequent weeks and went on to collect $415 million at the domestic box office, the paper noted.

Last year at this time, Disney Pixar’s major film was “Incredibles 2” and that brought in a record-breaking $183 million at the domestic box office.

“Also in ‘Toy Story 4’s’ favor is some of the best reviews of the franchise to go along with an ‘A’ CinemaScore from opening day audiences,” said Brad Bevet of Box Office Mojo. “On top of that, the film has a long runaway ahead of it as the next major family film isn’t until July 19 and it is yet another Disney picture in ‘The Lion King.’”

In China, the world’s No. 2 box-office market, the movie is running second to an unlikely competitor: Hayao Miyazaki’s “Spirited Away,” a 2001 animated classic that is just being released in Chinese theaters now, the Wall Street Journal reported.

Disney now has the four highest opening weekends of the year so far. TS4 had the third highest behind only other Disney titles “Captain Marvel” and “Avengers: Endgame.” “Aladdin” rounds out the top four.

Cathleen Taff, distribution chief for Disney, told the Associated Press that “the Pixar team has always been disciplined about making sure they have a compelling story to tell, and that is especially true when it comes to sequels if you look at their past. Their process of sort of going through the rigor of making sure that this is a story people want told, the end result speaks for itself.”

Acording to Box Office Mojo, the next highest weekend box office domestic take went to “Child’s Play” at just more than $14 million, then “Aladdin” at $12.2 million, “Men in Black International” at $10.75 million and “The Secret Life of Pets 2” at $10.29 million.

In a summer that’s running 6.5% off the pace of last year, according to Comscore, many studio watchers had positioned “Toy Story 4” as the season’s savior.

The longevity of “Toy Story 4” is expected to be challenged in July by “Spider-Man: Far From Home,” critical and audience reception has been characteristically strong, the Wrap reported. The film matched the Rotten Tomatoes results for “Toy Story 3” with 98%.

Trump: ‘Surprise’ question about Pence 2024 led him to hesitate