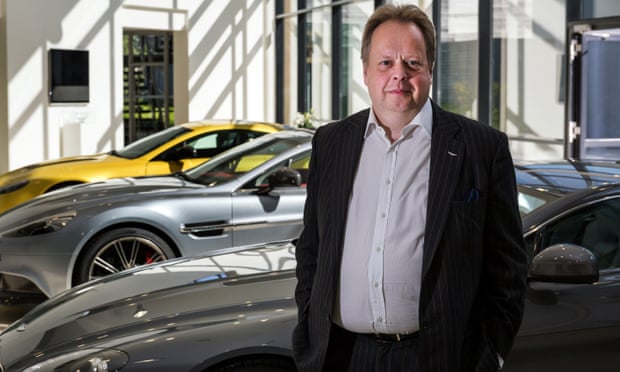 The chief executive of Aston Martin faces the prospect of a vote against his pay package as he faces shareholders for the luxury carmaker’s first annual meeting as a listed company.

Andy Palmer has led the company since 2014, but investor scrutiny of his £1.2m salary – before a potential bonus five times larger – has increased as shares have slumped from the price at the carmaker’s much-anticipated stock market flotation.

There is little prospect of Aston Martin losing the vote because the majority of shares are owned by Italian private equity firm InvestIndustrial and Kuwaiti investors. However, a symbolic vote against the binding pay policy would add to pressure on the company’s leaders.

Aston Martin’s struggles in recent months have come despite making progress on opening a new factory in south Wales to make the DBX, the brand’s first sports utility vehicle in its 106-year history.

Palmer is hoping the car, which will retail from £140,000-£160,000, will become Aston Martin’s most popular model, helping to double production.

The company has also confirmed its Valhalla supercar will feature in the 25th James Bond film, scheduled for April 2020. Aston Martin counts product placement in the series as a key part of its marketing.

Aston Martin’s valuation has fallen by almost half since October, when the shares were listed, to £2.3bn. The company disappointed in its first full quarter as a listed company, as higher costs from sales and marketing dragged on profits.

Institutional Shareholder Services, an influential adviser to investors on governance issues, has recommended that shareholders vote against the company’s first public remuneration policy because of the “quantum” – the size – of Palmer’s potential earnings.

In a report for clients, ISS said: “There are significant concerns regarding CEO Andy Palmer’s salary of £1.2m, which is well above UK market norms for a company of this size and appears to be pitched above similar positions at comparable companies.”

ISS also balked at Palmer’s “extremely competitive” potential bonus and share awards, worth as much as £6m annually if certain targets are met.

In a response to ISS, Aston Martin said it was “unique” and that Palmer was “one of the leading and most experienced executives in the global automotive industry”.