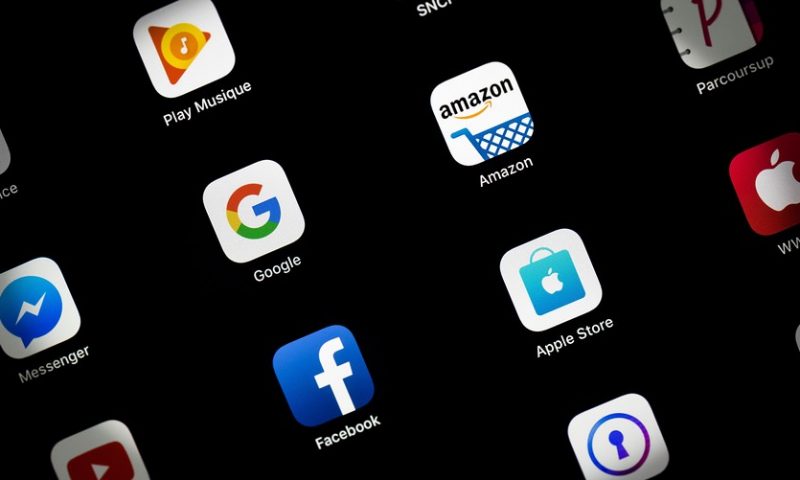 U.S. stocks closed higher Monday on the back of strong gains in social media and entertainment shares such as Facebook Inc. and Netflix Inc., as investors await the Federal Reserve’s policy-setting meeting due to start Tuesday,

The Federal Reserve will be the focus this week with markets pricing in more than two interest rate cuts this year on fears of the fallout from global trade tensions and a slowdown in the economy. Investors will want to see if those expectations match up to what the Fed is thinking, though no move on interest rates is expected at this week’s meeting.

A survey of manufacturing activity in the New York state area showed its largest-ever drop into negative territory in June. The Empire State manufacturing index plummeted 26.4 points to negative 8.6 in June, a record decline. Economists had expected a reading of positive 10, according to a survey by Econoday.

Any reading below zero indicates a contraction in activity. The last time the index was negative was in October 2016.

A reading from the National Association of Home Builders survey for June showed that home-builder confidence fell two points to 64 in June, missing economists’ consensus forecast of a one-point increase. Any reading over 50 signals improvement.

On the global trade front, Commerce Secretary Wilbur Ross played down the likelihood of a major deal at the Group of 20 summit later this month, even if President Donald Trump and China President Xi Jinping meet. The most likely outcome will be an agreement for the U.S. and China to keep talking, he told The Wall Street Journal in an interview.

Separately, the Office of the U.S. Trade Representative is holding seven days of public hearings on the Trump administration’s proposal to raise a 25% levy on $300 billion of Chinese exports, including consumer goods such as mobile phones and laptops.

“The past few days managed little to no real progress for bulls nor bears, and by Friday’s close, S&P was less than a half point away from were prices had closed Monday. This coming week brings about the much anticipated June [Federal Open Market Committee] meeting, and while a lowering of rates has not been priced in by the market for Tuesday, such a move is expected by July, and failure to do so would be a surprise to markets (based on current positioning),” wrote Mark Newton, technical analyst at Newton Advisors, in a research note.

Ian Winer, an advisory board member of Drexel Hamilton, suggested that the Fed may cut rates sooner and more aggressively than expected due to pressure from President Trump.

“I am pretty sure the brow beating led to the massive about face in February from hawkish to dovish. I also don’t see how his comments and complaints over both social media and live interviews have no effect on the mindset of [Jerome] Powell,” he said. “I think as we get closer to the election we will hear more of the same. The Fed’s independence is in question at this point, especially as the president laments that Xi can do whatever he wants with his monetary policy.”

Facebook FB, +4.24%  shares rose 4.2% as the social-media company was reportedly set to rollout its foray into cryptocurrencies, Libra coin, as early as Tuesday.

Shares of Array BioPharma Inc. ARRY, +56.94% soared 57% after the biopharmaceutical company focused on developing cancer treatments agreed to be acquired by Pfizer Inc. PFE, +0.28% in a deal valued at $11.4 billion.

Chewy Inc.’s stock CHWY, -3.69% fell 3.7% after the online pet retailer on Friday made its debut as a publicly traded company, soaring nearly 60%.

Auction house Sotheby’s BID, +58.60% announced a deal to be acquired by BidFair U.S.A., which is owned by telecom and media entrepreneur and art collector Patrick Drahi, in a deal valued at $3.7 billion. Shares of the company skyrocketed 59%.