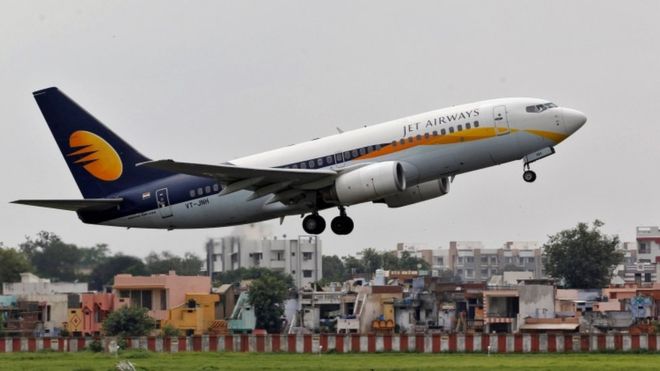 Lenders to Jet Airways have said they plan to bring insolvency proceedings against the struggling carrier.

The move follows a failed attempt to find a suitable buyer for what was once India’s biggest private airline.

In April, the airline suspended all international flights. The move left passengers stranded in India and European cities including London, Paris and Amsterdam.

Etihad Airways already owns 24% of Jet Airways and is reported to have expressed an interest in taking more control.

Banks have been seeking a buyer for the airline, but the latest development by the carrier’s lenders suggest there are no serious bidders available.

The insolvency process, if successful, will allow lenders such as State Bank of India to begin selling parts of the business, or assets, in order to recover some of the money they are owed. A court will decide what happens next.

Pilots, engineers and ground staff have not been paid for months, and passengers have been left stranded around the world as a result of cancellations.

Jet Airways was formed in 1993 after India liberalised its economy and allowed competition from private carriers.

The rise of Jet Airways coincided with the decline of Air India, which was plagued by poor service and bad business decisions.