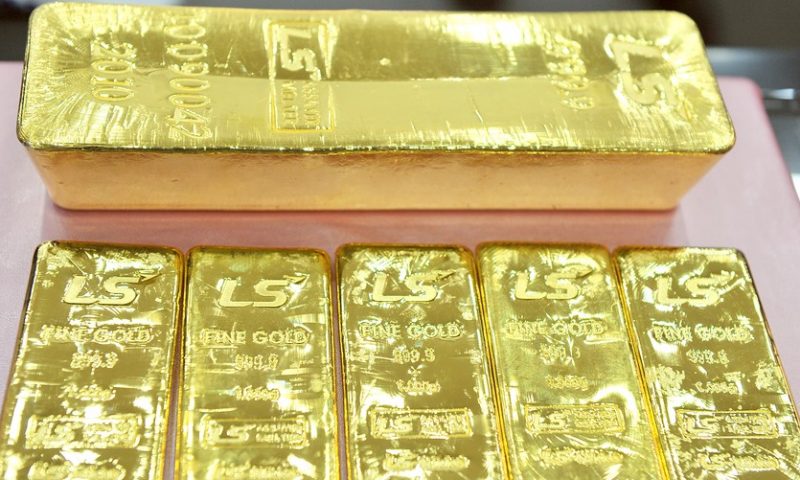 Gold futures finished lower on Monday, following a four-session streak of gains, pressured by uncertainty ahead of a meeting of the U.S. Federal Reserve that’s expected to offer hints on the central bank’s plan on interest rates.

International trade clashes and a concern over a weakening global economy, however, limited losses for the haven metal.

The Federal Open Market Committee will conclude a two-day policy meeting on Wednesday.

In economic data Monday, the New York Fed’s Empire State business conditions index took a sharp turn for the worse in June, falling into negative territory for the first time in more than two years.

“The FOMC most likely will not lower interest rates this week; but will pave the way with a change in language in their statement for a rate decrease in July along with more speculation going forward,” he said.

Some commodity strategists say the precious metal could be facing resistance from bearish traders who think prices have climbed too briskly and the metal also is encountering a price point that is has failed to climb above since late June of 2016 when Britain voted to exit from the European Union, jolting global markets.

“In any case, the jump seen in the final part of last week, could represent an important test to the key resistance level of $1,350-1,370, an area which has always stopped the recovery of bullion in the last 4 years, starting from summer 2016, just after the Brexit vote, when the yellow metal stopped its rally in this area (slightly above, at $1,374),” wrote Carlo Alberto De Casa, chief analyst at ActivTrades, in a daily research note.

The Office of the U.S. Trade Representative was due to open seven days of public hearings on the Trump administration’s proposal to raise a 25% levy on $300 billion of Chinese exports, including consumer goods such as mobile phones and laptops.

Worry about the impact of U.S.-led tariff battle have helped to push prices for precious metals, which tend to rise in times of uncertainty, to new highs before values pulled back to end last week’s trade.

Google Puts up $1B to Ease Housing Headaches It Helped Cause