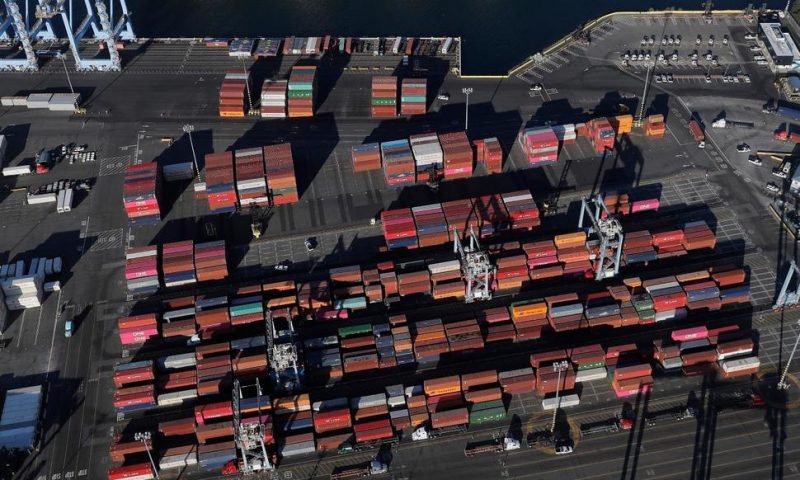 The Commerce Department said Thursday that the gap between the goods and services the U.S. buys and those it sells abroad fell 2.1% to $50.8 billion in April from March. Exports fell 2.2% to $206.8 billion on a big drop in orders for civilian aircraft, a category that is often volatile. Imports dropped 2.2% to $257.6 billion on tumbling purchases of semiconductors, chemicals and diamonds.

President Donald Trump has sought to reduce America’s persistent trade deficit, which he sees as a sign of economic weakness and the result of bad trade agreements crafted by naive U.S. negotiators. He has slapped tariffs on foreign steel, aluminum, dishwashers, solar panels and on thousands of Chinese goods.

Mainstream economists say the trade gap is the product of an enduring economic factor that doesn’t respond much to changes in trade policy: Americans buy more than they produce, and imports fill the gap.

Trump has escalated trade hostilities over the past month. In May, he more than doubled import taxes on $200 billion in Chinese goods and prepared to extend tariffs to the $300 billion in imports from China he hasn’t already targeted.

The world’s two biggest economies are locked in a dispute over U.S. allegations that China steals American technology and forces foreign companies to hand over trade secrets in a sharp-elbowed drive to supplant U.S. technological dominance.

Trump is fighting with Mexico, too. On Monday, he is set to impose 5% tariffs on all Mexican imports, ratcheting them up to 25% Oct. 1 if Mexico doesn’t do more to stop the flow of Central American migrants to the U.S. border.

In April, the United States recorded a $71.7 billion deficit in the trade goods like cars and aircraft but a $20.9 billion surplus in the trade of services such as banking and education.

Union: Ford to Close Plant in Wales That Employs 1,700

US Productivity Grew at Solid 3.4% Rate in First Quarter