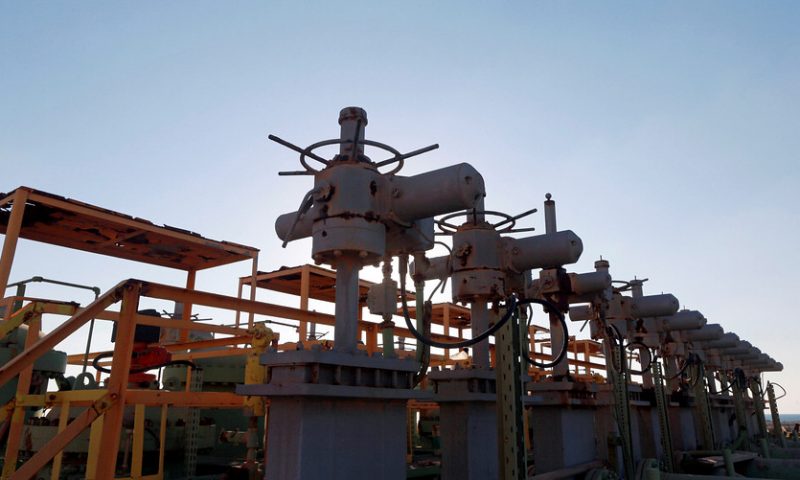 After spending much of Thursday’s session struggling for direction, oil futures climbed sharply by the settlement, as a report that the U.S. may delay tariffs on Mexico helped ease concerns over trade tensions that threaten to hurt energy demand.

The move comes a day after U.S. benchmark crude entered a bear market on the back a report showing domestic supplies hit a nearly two-year high.

West Texas Intermediate crude for July delivery CLN19, +1.27% rose 91 cents, or 1.8%, to settle at $52.59 a barrel on the New York Mercantile Exchange. It had been trading modestly lower just 15 minutes before the settlement.

Oil rebounded on the report of a potential delay to tariffs on Mexico, said Phil Flynn, senior market analyst at Price Futures Group. The news “erased fear of negative demand.”

WTI prices Thursday, however, remained more than 20% below the most recent high of $66.30 on April 23, according to Dow Jones Market Data. A bear market is traditionally marked by a drop of 20% or more from a recent high.

A weakening global economic backdrop, amplified by tariff tensions between the U.S. and some of its key trading partners, have underpinned lower moves in crude on fears of softer demand for energy.

Meanwhile, supplies have been rising. The Energy Information Administration on Wednesday reported that U.S. crude supplies rose by 6.8 million barrels for the week ended May 31. That was the largest weekly increase in five weeks.

Traders are also watching updates on a production-cut agreement between the Organization of the Petroleum Exporting Countries and other major oil producers ahead of the deal’s expiration at the end of this month. The next OPEC meeting, which had been scheduled for June 25-26, may be postponed to early July at the request of Russia, according to some news reports.

James Hatzigiannis, senior commodities associate at Long Leaf Trading Group, believes the recent steep decline in oil prices was “an over-reaction,” to prospects for a global slowdown and rising U.S. supplies. “OPEC states are going do everything they can to stabilize prices. OPEC will not let crude price continue to fall like this is the long-run,” he said.

Rystad Energy estimates OPEC crude oil production of 29.9 million bpd for May, the lowest monthly output level in more than five years and an “astonishing” 2.6 million barrels a day below October 2018 reference levels.

For this year, Rystad forecasts OPEC crude production of 30.3 million bpd, down 1.6 million bpd year-over-year. “We continue to expect OPEC production to increase through the remainder of 2019, but risks to short-term supply are undoubtedly still plentiful, with a total of 1.3 million bpd at risk from Iran, Venezuela, Libya and Nigeria,” Bjørnar Tonhaugen, head of oil-market research at Rystad Energy wrote in a report.

Back on Nymex, prices for natural gas finished lower after the EIA said Thursday that supplies of the commodity rose by 119 billion cubic feet for the week ended May 31. That was larger than the increase of 111 billion expected by analysts polled by S&P Global Platts.

FedEx Will Stop Air Shipments of Packages for Amazon