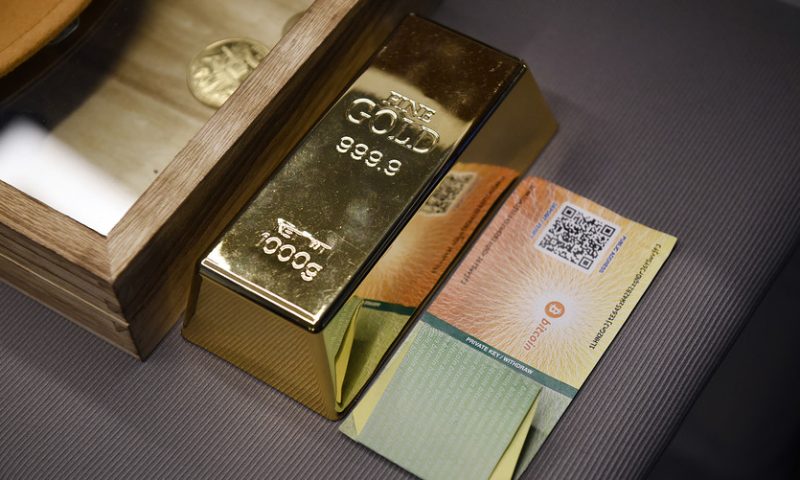 Gold futures finished with a modest gain Tuesday to tally a fifth straight session climb, as a broad rise in benchmark U.S. stock indexes failed to knock prices for the haven metal lower.

Gold has climbed this week, largely on the back of more tension between the U.S. and other countries over trade and tariffs along with expectations for lower interest rates as bond yields have fallen sharply.

Gold for August delivery on Comex GCM19, +0.12% rose 80 cents, or nearly 0.1%, to settle at $1,328.70 an ounce after spending much of the session struggling for direction. The settlement was the highest since Feb. 25, according to FactSet data. Futures for the yellow metal have now posted gains for five consecutive sessions, the longest since a similar streak ended on Jan. 31.

The U.S. stock market gained in Tuesday trade, but investors remained skittish with no apparent progress made on the trade policy front and May data on U.S. manufacturing released Monday revealing the slowest pace of expansion in 2½ years.

On Tuesday, Federal Reserve Chairman Jerome Powell suggested that interest rates could be cut if trade tensions damage the economic outlook. Powell also said the Fed didn’t know “how or when” these trade issues would be resolved.

The U.S. dollar “quickly reversed the losses it initially made in response to Powell’s comments,” said Craig Erlam, senior market analyst at Oanda. On Tuesday as gold futures settled, the ICE U.S. Dollar Index DXY, -0.02% was nearly flat at 97.160.

“As ever, there was a decent reaction to his [Powell’s] initial comments but they were hardly conclusive, which may explain why the dollar made up initial losses and gold struggled to hold on to gains,” Erlam told MarketWatch. “The view seems to be that June is open [to an interest-rate cut] but currently unlikely and Powell’s comments haven’t changed that. Friday’s [U.S.] jobs report, on the other hand, may.”

On Monday, the tech-heavy Nasdaq Composite Index COMP, +2.65% retreated into correction territory, defined as a decline of at least 10% from a recent peak, amplifying moves into perceived havens like gold and government bonds and commensurately driving yields to fresh lows. But the index recovered some ground Tuesday.

Analysts at Capital Economics forecast “that the stock market will fall much further: our end-2019 forecast for the S&P 500 is 2,300, which is about 17% below its level now,” said Simona Gambarini, markets economist at Capital Economics. “With all this in mind, we project that the price of gold will end 2019 at around $1,400 per ounce…”

The intensifying battle between the U.S. and China over tariffs, along with forecasts for weaker global economic growth and lower corporate profits, have encouraged investors to look for havens such as gold over the past several sessions.

Lower rates — with the 10-year Treasury note yield TMUBMUSD10Y, -0.61% plunging to a new 21-month low Monday before climbing Tuesday — had helped to support buying in precious metals, which don’t bear a yield.

Bullish gold investors say that bullion’s trade above $1,300 is an upbeat sign in the near term for the asset.

“From a technical point of view the recovery above the psychological threshold of $1,300 represents a first positive element, while the strength shown in the last 48 hours, with the rally up to $1,330 is confirming the bullish scenario,” wrote Carlo Alberto De Casa, chief analyst at broker ActivTrades.

US Services Company Grew at Faster Pace in May