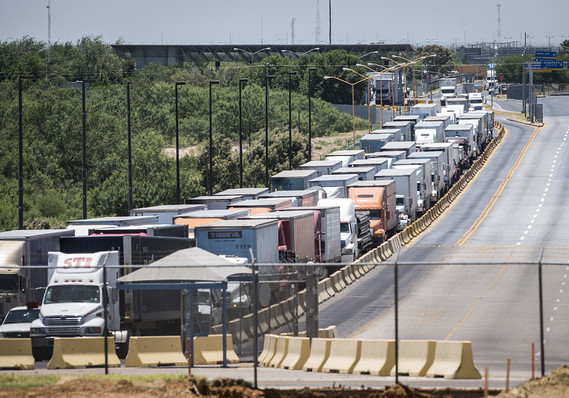 Three cheers for the strongest U.S. jobs market in decades: It’s the best hope for the U.S. to ride out one trade war with China and another conflict potentially looming with Mexico.

If these were normal times, Wall Street would be gearing up this week for the latest snapshot on hiring. The U.S. is expected to add a solid 175,000 new jobs in May, keeping the unemployment rate at a 50-year low of 3.6%, according to a MarketWatch survey of economists.

Instead Wall Street is sure to remain fixated on whether the Trump White House actually goes through with plans to slap a 5% tariff on all imports from Mexico unless the country shuts off the flow of immigrants to the United States.

The employment figures and a big batch of upcoming economic reports “will continue to be overshadowed by concerns about escalating U.S. trade tensions,” RBC Research said.

China and Mexico are two of three largest trading partners of the United States. Last year, the U.S. and Mexico exchanged $612 billion in goods, including oil, autos, computers, fruits and vegetables. Millions of U.S. jobs are directly or indirectly tied to trade with Mexico.

In a worst-case scenario, the trade fights would lead to stiffer tariffs that raise the cost of countless goods for consumers and businesses, triggering a broader economic slowdown and adding to inflation. Jobs could also be lost.

“When giants fight, folks get trampled,” summed up Scott Anderson, chief economist at Bank of the West.

The tariffs are already imprinting themselves into the public consciousness.

Some 35% of respondents to the monthly survey of consumer sentiment expressed worry at the increase in U.S. tariffs on China, the University of Michigan said. The survey noted an erosion in consumer confidence in the last two weeks of May.

The president’s threat against Mexico was also felt immediately. The Dow Jones Industrial Average DJIA, -1.41% and S&P 500 SPX, -1.32% sank last Friday and the interest rate on a 10-year Treasury TMUBMUSD10Y, -0.21% slid to a 20-month low of 2.15%. Business leaders around the country also reacted with alarm.

Not surprisingly, stocks took a beating in May, suffering the first monthly decline since December.

Don’t look for a quick rebound, either. The White House said the tariff on Mexico won’t be applied until June 10 to give the country a chance to take action. Investors are likely to take a wait-and-see approach. The standoff with China, what’s more, has shown little sign of ending.

The trade disputes are heating up just as the U.S. is on the verge of setting the record for longest expansion ever — an achievement underpinned by the ebullient labor market. The percentage of people who think a recession is likely in the next five years fell to 38% in May to mark the lowest level since 2004, the consumer sentiment survey showed.

All that optimism could vanish, economists warn, if the tariffs on Mexico are enacted and the trade disputes drag on beyond the summer.