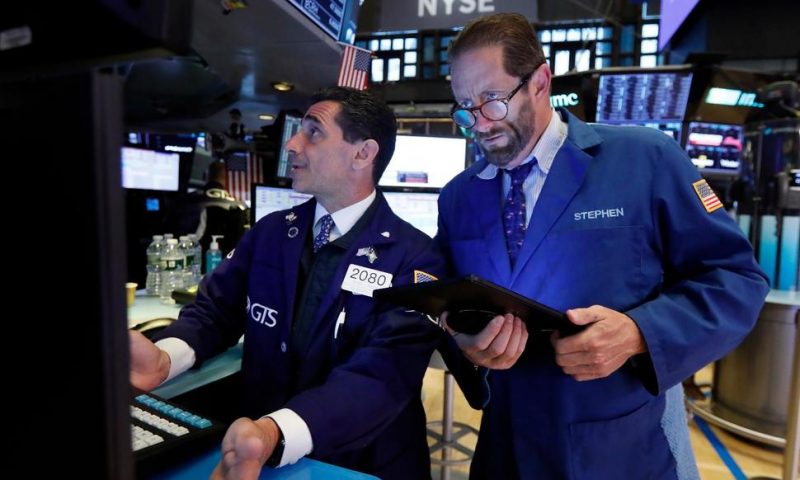 Stocks closed out a turbulent month on Wall Street with another round of sharp losses Friday after President Trump announced plans to expand a trade war to Mexico.

Wall Street is no fan of Tariff Man.

The stock market stumbled Friday to its first losing month of 2019 in May, primarily due to President Donald Trump’s decision to broadly wield his tariff powers, first against China over trade and then against Mexico over immigration.

During stocks’ month-long slide investors wrestled with the potential impact that the U.S.’s escalating trade war with China could have on corporate and economic growth. Friday’s losses came after Trump announced plans via Twitter to impose tariffs on Mexico in a bid to compel the nation’s third-biggest trading partner to crack down on migrants attempting to enter the U.S.

The move shocked investors and spurred a broad sell-off that sliced more than 350 points from the Dow Jones Industrial Average. The selling left the benchmark S&P 500 index 6.6% lower for the month, and up 9.8% for the year so far.

“Clearly the markets were blindsided and completely caught off guard,” said Cliff Hodge, director of investments for Cornerstone Wealth.

It was only a month ago that the S&P 500 hit a record high and underlined its claim as the longest bull market for stocks on record, at more than a decade long. The market had climbed steadily through 2019 amid rising investor confidence that a deal with China was at hand and that the Federal Reserve would not tip the economy into recession by raising interest rates too aggressively.

But when the first weekend of May arrived, Trump’s tweet threatening more tariffs on China upended months of calm in the market. Investors are now preparing for a much longer and messier resolution to the global trade war than they were expecting just a few weeks ago.

The trade conflicts have also clouded the global economic outlook, with many economists now forecasting U.S. growth to weaken in the coming months. That’s likely to weigh on corporate profits this year.

“What you had over the last few days really is an increase in global uncertainty, and the economic data has been poor and weakening,” said Tom Martin, senior portfolio manager with Globalt Investments. “With rising costs as a result of tariffs and rising uncertainty, that’s definitely going to have a damper on earnings.”

“You had a market that was feeling as though President Trump would want to do a deal so that the economy would not be hurt,” said Martin. “And now the behavior is indicating that he will use (tariffs) to accomplish his goals and seems less concerned about the actual economic impact.”

Since the end of April, investors have sought out safer investments like utilities and bonds. Technology stocks, which led gains all year, were among the month’s biggest losers. The technology heavy Nasdaq shed 7.9%, while technology companies within the S&P 500 lost 8.9%.

Utilities, which have lagged the market, fell only 1.3% in May, making them among the month’s best performers. Meanwhile, real estate stocks posted a 0.9% gain, the only winners this month.

The new tariffs on Mexican goods shocked investors who were already nervous about a global trade war crimping economic growth.

Investors have been shifting money into bonds over concerns that economic growth will be crimped by the ongoing trade war. Lower bond yields drag down interest rates, making lending less profitable for banks. Citigroup fell 2.3% and Bank of America lost 2.1%.

Investors have been fleeing to safer holdings all month. The shift to utilities and bonds quickened earlier in May after the U.S. and China broke off negotiations. The U.S. then pushed more tariffs on Chinese goods along with a ban on technology sales. That prompted retaliatory tariffs from China and threats over other key resources.

While the U.S. economy grew at a solid 3.1% annual rate in the January-March quarter, many economists now think growth is likely to weaken in coming months. They cite a range of threats facing the U.S. economy, including escalating trade conflicts, more cautious spending by consumers and businesses, and a global economic slowdown.

On Friday, a report showed China’s factory activity slowed in May as the trade war between Washington and Beijing escalated.

Economists say China may be drawing up its own list of retaliatory targets among U.S. companies. The worry is that a trade war fought on multiple fronts around the world will be a drag on corporate profits and on a U.S. economy that’s been supported by a solid job market.

That worry pulled the yield on the 10-year Treasury note to its lowest level since the summer of 2017. That’s left long-term Treasury yields below some short-term yields, an unusual occurrence that many investors see as a warning sign of recession.

Investors are also raising their bets that the Federal Reserve will need to cut interest rates later in 2019 to help the economy, less than a year after it had been raising rates to get them closer to normal.

“The fact that the president is willing to use tariffs as a weapon can really cause damage to business confidence,” Hodge said. “You’ve got to be wondering, who’s next?”

US Consumer Spending Slows to 0.3% Gain in April

How Tariff Hikes Are Squeezing the U.S. Furniture Business