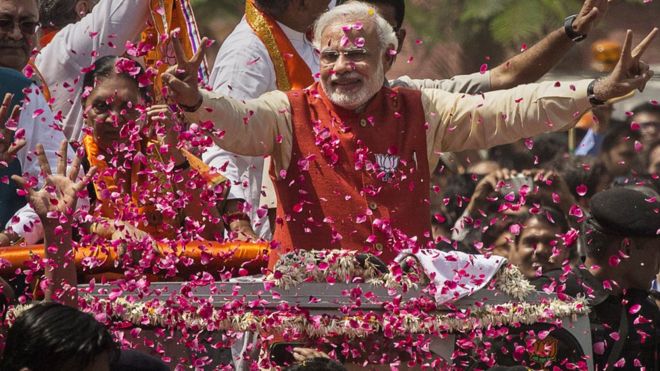 Indian stocks and the rupee rose to welcome the news: another parliamentary majority for the BJP party could grant Mr Modi the opportunity to make promised reforms a reality.

But once the euphoria around his emphatic win at the polls has faded, there will remain some tough economic challenges in his in-tray.

What did he do in his first term?

The economic record for Mr Modi’s first term in office is mixed.

He initiated some bold reforms, such as a new bankruptcy law, to help tackle a rise bad debts that was putting pressure on the banking sector.

His government reduced red tape, helping move India to 77th in the World Bank’s 2019 Doing Business ranking, an improvement from 134th place when he first took office in 2014.

But his biggest gamble, banning more than three quarters of the rupee notes in circulation in order to battle corruption, misfired and delivered a significant blow to economic growth. Without replacement notes ready in time, India’s gigantic informal economy was temporarily crippled – leading to job losses.

The rollout of a new national sales tax didn’t go smoothly either. In the long run the new tax is expected to boost economic growth by streamlining a multitude of complicated taxes into a single tax. But in the short term glitches around its introduction had a severe impact on millions of small and medium-sized businesses.

What should we expect in his second term?

As Mr Modi gets his feet back under the desk for his second term, economists like Surjit Bhalla believe that his increased majority will give Mr Modi more freedom to take tough decisions.

“Given the size of the mandate, we can expect bolder reforms during the next five years,” says Mr Bhalla, who served on the prime minister’s economic advisory council during Mr Modi’s first term.

But the scale of India’s problems matches that mandate.

Economic growth slowed to 6.6% in the three months to December 2018, the slowest rate for six quarters.

According to a leaked government report, unemployment touched a 45-year high between 2016 and 2017.

What will he do about jobs?

The new government should focus on labour-intensive sectors like construction, tourism, textiles and agricultural products, he adds.

Unlike China, India’s economic growth has been driven by domestic consumption over the last fifteen years. But data released over the last few months suggests that consumer spending is slowing.

Sales of cars and SUVs have slumped to a seven-year low. Tractor, motorbike and scooter sales are down. Demand for bank credit has sputtered. Hindustan Unilever has reported slower revenue growth in the most recent quarter. All of these are important benchmarks for measuring consumer appetite.

Mr Modi’s party promised in its manifesto that it would cut income tax to ensure more cash and greater purchasing power stayed in the hands of middle-income families.

However, given the current state of government finances, that may not be possible immediately. India’s 3.4% budget deficit – the gap between government expenditure and revenue – may restrict Mr Modi’s options.

“The widening fiscal deficit is a slow-acting poison,” says Mr Ranade. He believes this will hold back medium and long-term growth.

Will he help farmers?

The agrarian crisis was a constant challenge for Mr Modi during his first term. Farmers across the country protested on the streets, demanding higher prices for their crops.

Small-scale farmers have been promised more support, but structural changes to the way the market works might be preferable to measures that will put additional pressure on the government’s already stretched budget, argues Ila Patnaik, a former economic advisor to the government of India.

She would like to see the end of the system whereby farmers are required to sell their products to state-owned agencies at a fixed price.

“We need to free up the farmers so that they can sell products to whoever they want. This will also encourage them to move to high value products,” she says.

One of his headline election pledges was a promise to spend $1.44 trillion to build roads, railways and other infrastructure. But such an eye-watering sum will have to come from somewhere. Many observers expect privatisation to play a key role.

Mr Modi made slow progress on his pledges to sell off government enterprises in his first term. The government did initiate the process of selling a majority stake in national carrier Air India, but with a tepid response from investors, the plan failed to take off.

“The next two years is a good time for the government to [speed up] the process of privatisation,” he argues.

And he believes a willingness to embrace bolder policies could entice more foreign investors to put their money in India.

“During his first term, Mr Modi has shown the appetite to take up tough reforms and he will definitely try to take even bigger risks during his second term,” he says.