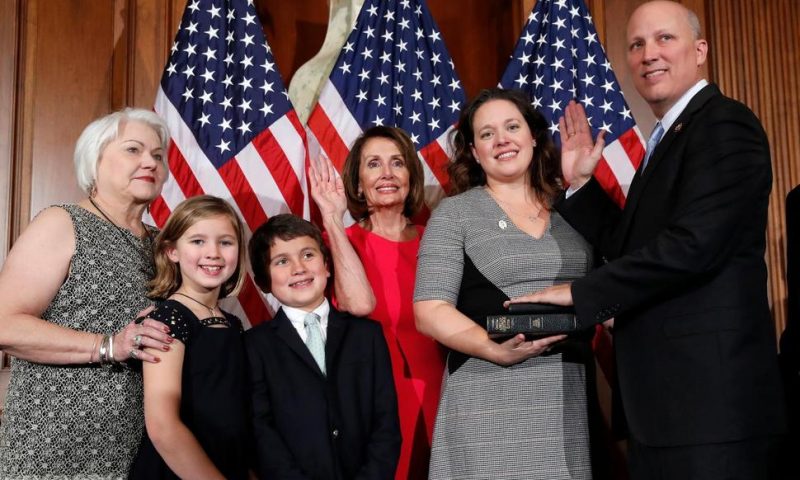 A House GOP conservative has blocked a long-overdue $19 billion disaster aid bill, complaining it leaves out money needed to address the migrant crisis at the border.

WASHINGTON — A House GOP conservative blocked a long-overdue $19 billion disaster aid bill Friday, complaining it leaves out money needed to address the migrant crisis at the border and extending a tempest over hurricane and flood relief that has left the measure meandering for months.

The move came a day after the measure flew through the Senate despite a Democratic power move to strip out President Donald Trump’s $4.5 billion request for dealing with a migrant crisis on the U.S.-Mexico border.

Texas Rep. Chip Roy, a former aide to Texas firebrand Sen. Ted Cruz, complained that it does not contain any money to address increasingly urgent border needs. “It is a bill that includes nothing to address the international emergency and humanitarian crisis we face at our southern border,” Roy said.

He also objected to speeding the measure through a nearly empty chamber, saying it was important for lawmakers to actually vote on a bill that “spends a significant amount of taxpayer money.”

House Speaker Nancy Pelosi, D-Calif., a key force behind the measure which moved through the Senate with the enthusiastic embrace of Roy’s two GOP senators, said the delays have gone on too long. Senate action came after Trump surrendered in his fight with powerful Democrats over aid to hurricane-ravaged Puerto Rico.

“Now, after the President and Senate Republicans disrupted and delayed disaster relief for more than four months, House Republicans have decided to wage their own sabotage,” Pelosi said. “Every day of Republican obstruction, more disasters have struck, more damage has piled up and more families have been left in the cold.”

Democrats said the House might try to again pass the measure next week during a session, like Friday’s, that would otherwise be pro forma. If that doesn’t succeed, a quick bipartisan vote would come after Congress returns next month from its Memorial Day recess.

Rep. Donna Shalala, D-Fla., said she was upset at Roy’s action. “The fact that one person from a state that is directly affected could object, it’s just irresponsible,” she said. Texas was slammed by record floods in 2017, though not Roy’s San Antonio-area district.

GOP leaders and Trump support the bill, as do some lawmakers who are otherwise some of the chamber’s staunchest conservatives, such as Rep. Austin Scott, R-Ga.

“This is a rotten thing to do. This is going to pass,” said Rules Committee Chairman Jim McGovern, D-Mass.

Hours after Roy blocked the measure, the Democratic Congressional Campaign Committee launched a digital ad in his district criticizing his move. It depicted a submerged Roy and said he’s “keeping Texas families underwater.”

Roy won his 2018 election by less than three percentage points. House Democrats’ campaign committee considers him a prime target for next year’s elections.

The relief measure would deliver money to Southern states suffering from last fall’s hurricanes, Midwestern states deluged with springtime floods and fire-ravaged rural California, among others. Puerto Rico would also get help for hurricane recovery, ending a months-long dispute between Trump and powerful Democrats like Senate Minority Leader Chuck Schumer.

Trump said Thursday that he will enthusiastically sign the bill, which delivers much-needed help to many areas in the country where he performs well with voters.

The House drama came less than 24 hours after the Senate passed the bill by a sweeping 85-8 vote that represented a brush-back pitch by a chamber weary of Trump’s theatrics and where some members are increasingly showing impatience with the lack of legislative action.

Trump said he favored the bill even though $4 billion-plus to deal with the humanitarian crisis involving Central American migrants border has been removed.

“I didn’t want to hold that up any longer,” Trump said. “I totally support it.”

Disaster aid bills are always ultimately bipartisan, but this round bogged down. And a late-week breakdown on the appropriations panel left important must-do work for lawmakers when Congress returns next month.

After months of fighting, Democrats bested Trump and won further aid to Puerto Rico, the U.S. territory slammed by back-to-back hurricanes in 2017.

Talks over Trump’s border request broke down over conditions Democrats wanted to place on money to provide care and shelter for asylum-seeking Central American migrants. Talks were closely held and the opaque process sometimes left even veteran lawmakers in the dark.

Senate Majority Leader Mitch McConnell, R-Ky., accused Democrats of insisting on “poison pills” that made the talks collapse. But his office wouldn’t go on the record to specify what they were. Other Republicans, especially those trying to project a bipartisan image for next year’s campaign, were more circumspect.

“Right now the total dollar amounts are pretty close on border security. Democrats and Republicans are pretty much in agreement about it,” said Sen. David Perdue. “We’re just trying to work out some detailed language, but we didn’t think we could wait any longer to get this done.”

In fact, among the reasons for the late-week breakdown was a demand by Hispanic forces and House liberals such as Pelosi ally Rosa DeLauro, D-Conn., to insist on a provision to tighten up existing language that tries to block the Homeland Security Department from getting information from the Department of Health and Human Services to help track immigrants residing in the U.S. illegally if they care for migrant refugee children arriving in huge numbers at the border.

All sides agree that another bill of more than $4 billion will be needed almost immediately to refill nearly empty agency accounts to care for migrants, though Democrats are fighting hard against the detention facilities requested by Trump.

Trump rushed to try to claim credit, too, though his budget office never submitted an official request for the disaster aid. But he talked up the aid in a recent trip to the timber-rich Florida Panhandle, his best region in a state without which it’s virtually impossible for him to win reelection.

“Well, we’re going to get the immigration money later, according to everybody,” Trump said. “I have to take care of my farmers with the disaster relief.”

Maduro Invites Huawei to Set up 4G Network in Venezuela

China Ramps up War of Rhetoric in Trade Standoff With US