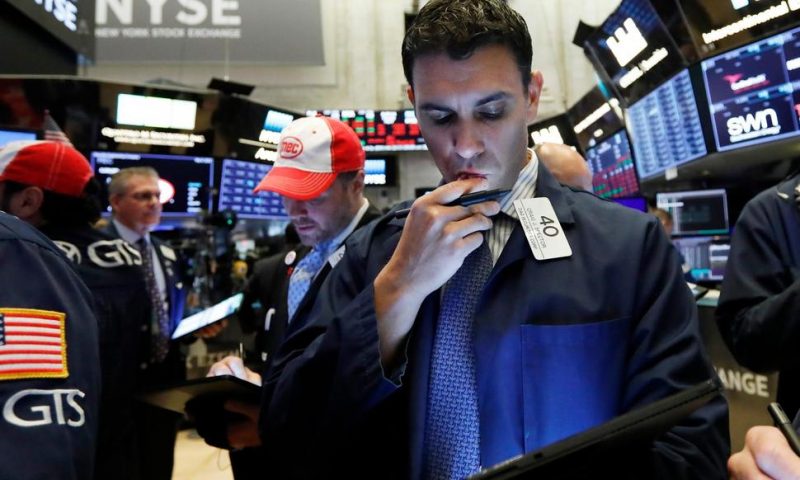 Stocks fell broadly on Wall Street Friday as investor jitters over the heated trade war between the world’s two biggest economies overshadowed encouraging developments in conflicts between the U.S. and other key trading partners.

The sell-off gained strength in the last hour of trading, handing the benchmark S&P 500 index its second straight weekly loss.

News that the U.S. reached a deal with Canada and Mexico to scrap tariffs imposed by the Trump administration last year on imported steel and aluminum failed to cheer up investors. Nor did word earlier in the day that President Donald Trump has delayed for six months a decision on taxing imported cars and auto parts as trade negotiations continue with the European Union and Japan.

Those developments took a back seat to growing uncertainty over how Washington and Beijing will resolve their costly trade dispute, which has escalated the past two weeks. On Friday, published reports noted that Chinese state media was sending signals that appeared to dim the prospects for progress in the next round of negotiations.

“You had the good news in the delay in the auto tariffs, but the bad news is it’s going to be a long slog with high tariffs on China,” said Tom Martin, senior portfolio manager with Globalt Investments.

Over the last week, the S&P 500 followed up its second worst day of the year with three straight gains, only to falter Friday.

Escalating tensions between the world’s largest economies have upended the calm that dominated markets earlier this year, when a trade agreement seemed to be in the works. The S&P 500 has twice dropped by at least 1.5% in the last two weeks, as many times as it had in the first four months of the year.

Market swings within the course of a single day have become common in recent weeks as investors react to developments in the United States’ trade disputes with other countries, primarily China. Trump made good on a threat to raise tariffs on Chinese-made products, and China retaliated with tariffs of its own. The threats were interspersed with some signs of reconciliation.

While the Trump administration has been pressing for change in trade terms with the European Union, Japan, Canada and Mexico, the market has remained focused mainly on the conflict between the U.S. and China, which has been getting more heated.

The Trump administration has issued an executive order aimed at banning Huawei equipment from U.S. networks. Another sanction that subjects the Chinese telecommunications giant to strict export controls took effect on Thursday. China has threatened to retaliate. It remains to be seen how the move will affect trade negotiations, which are expected to continue.

Technology and industrial stocks took some of the heaviest losses Friday. Utilities eked out a slight gain. Small company stocks fell more than the rest of the market.

Deere was the biggest decliner in the S&P 500 after the tractor maker cut its profit forecast for the year, citing slower sales from farmers worried about exports, among other factors. The stock slid 7.7%.

Pinterest plunged after the technology company reported a larger loss for the latest quarter than analysts expected. Shares of the digital pinboard company, which began trading last month, dropped 13.5%.

A report showing that U.S. shoppers remain more confident than economists expected helped spur a brief midmorning rally. The yield on the 10-year Treasury fell as low as 2.36% Friday morning from 2.40% late Thursday. It recovered to 2.39%.