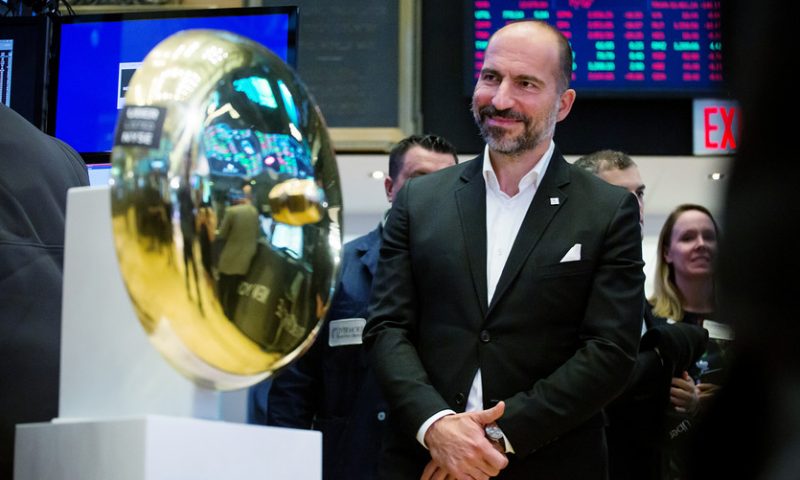 In an email published Monday on Twitter by New York Times reporter Mike Isaac, Khosrowshahi brought up the tough post-IPO trading periods for Facebook Inc. and Amazon.com Inc. as positive examples. The good cheer was likely needed as employees — some of whom received stock grants at higher prices than even the IPO price, much less the current going rate — started slashing their expected returns with Uber UBER, +2.88% stock falling more than 10% Monday.

“Remember that the Facebook and Amazon post-IPO trading was incredibly difficult for those companies. And look at how they have delivered since. Our road will be the same.”

Facebook FB, +0.89% , the last U.S. tech company to bring in more money in an IPO than Uber, struggled mightily in its first year on Wall Street amid doubts that it would survive the massive shift to mobile that was hitting warp speed when it went public in 2012.

Amazon’s AMZN, +1.11% large losses and avowed disinterest in valuing profitability instead of building for the future hurt it with investors for years after the dot-com crash, before continuing revenue growth and the launch of the Amazon Web Services cloud-computing service helped prices to recover and eventually soar again.

In the reported Monday morning email — MarketWatch asked an Uber spokesman to verify the correspondence, but did not receive a response before publication — Khosrowshahi also noted that Uber happened to start trading amid a fraught time on Wall Street. A public trade battle with China that was causing concern for investors for months blew up just before Uber shares began trading, with President Donald Trump following through with threats to increase tariffs to 25% on more goods coming to the U.S. from China as talks seemed to hit an impasse.

In Khosrowshahi’s view, the negative sentiment on Wall Street bled through to his company’s stock temporarily.

“There are many versions of our future that are highly profitable and valuable, and there are of course some that are less so. During times of negative market sentiment, the pessimistic voices get louder, and the optimistic voices pull back.”

While Khosrowshahi said in the email that he expects “tough public market times over the coming months,” he believes that Uber will be able to show a path to profit that will improve sentiment about the stock.

Tesla stock closes at lowest in more than two years