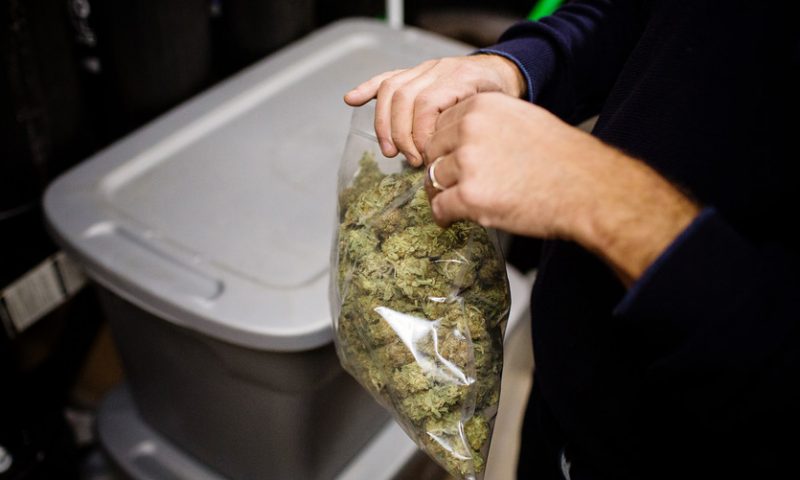 Cannabis stocks fell Thursday, swept up in the broader stock-market decline as trade tensions between China and the U.S. ramped up after President Donald Trump threatened further tariff retaliation.

The Dow Jones Industrial Average DJIA, +0.44%   fell 400 points at one point, after Trump claimed that China “broke the deal,” but has since recovered more than half of its losses.

In regulatory news, the National Association of Attorneys General sent a letter to congressional leadership on Wednesday, urging them to pass the SAFE banking act, a bipartisan bill aimed at protecting financial institutions that serve the cannabis industry in states that have legalized.

The letter from 38 state and territory attorneys general asks that Congress approve “the SAFE Banking Act or similar legislation that would provide a safe harbor for depository institutions that provide a financial product or service to a covered business in a state that has implemented laws and regulations that ensure accountability in the marijuana industry.”

The letter notes that the current state of affairs, in which companies are forced to handle large amounts of cash, has made it more difficult to track revenue for tax purposes as well as for regulatory compliance purposes.

From Canada comes a new study that has found that support for legal recreational cannabis is falling in Canada, while uncertainty about it is growing. The study, conducted by The Dalhousie University, found 50.1% of Canadians said they accept legalization, down from 68.6% in a 2017 study carried out before legalization in October of last year, according to media reports.

“We were surprised to see that Canadians are actually less enthusiastic about edibles since cannabis became legal last fall,” said Dr. Sylvain Charlebois, author of the report.

The survey comes ahead of the legalization of edibles in Canada in October. Only 36% of those surveyed said they would purchase cannabis-infused food products, down from 46% in the 2017 survey.

“With cannabis edibles being legalized in October, we are frankly curious about the decrease in interest expressed by survey respondents,” said Brian Sterling, one of the report’s co-authors. “We would like to understand that shift. It will be interesting to see how this perspective evolves as cannabis and infused products become more commonplace.”

Revenue rose to C$6.470 million from C$2.945 million a year ago. The FactSet consensus of six analysts was for a loss per share of 3 cents and revenue of C$6.390 million. The company sold 1,111 kilos of cannabis in the quarter, up from 501 kilos in the year-earlier period. Revenue per gram sold came to C$5.73 compared with C$5.67 a year ago. In the conference call Thursday, Cronos executives said it planned to use its large amount of cash for capital expenditures. Cronos also said it expected little sequential revenue growth compared with the first quarter.

Jefferies analyst Owen Bennett wrote in a note to clients that Thursday’s results do not give his team a reason to be less cautious on the name. Bennett rates Cronos a sell with a C$15 price target. Cronos continued to be the only company Bennett covers not to split out its recreational cannabis sales, which he estimates are roughly C$3 million — far below Canopy Growth Corp.’s C$58 millionCGC, +1.30% WEED, +1.02% C$22 million posted by Aurora Cannabis Inc.ACB, +0.00% ACB, +0.09% and the C$25 million logged by Organigram Holdings Inc. OGI, +6.08% OGRMF, +5.21%

Cowen analyst Vivien Azer wrote in a note to clients Thursday that the results largely met her team’s expectations. Azer has the equivalent of a hold on the name with a $21 price target. Previously Azer had a C$26 target price, but is no estimating lower overall sales and a slimmer bottom line.

Aurora shares fell 1.7%. The company said it has been selected by the Luxembourg Health Ministry to be exclusive supplier of a second delivery of medical cannabis to the Duchy. The company said the initial bid quantities are small, but that it showed its ability to work in complex, restricted markets.

Aleafia Health Inc. ALEF, +2.34%  said it welcomes changes to cannabis licensing announced by the Canadian healthy ministry, that seek to align the approach with other regulated sectors. The ministry will require all applicants to have a fully built site that meets all of the regulatory requirements at the time of application, and will complete a review of existing applications to speed up the process.

The disturbing reasons behind the ‘meteoric rise’ in Americans’ debt