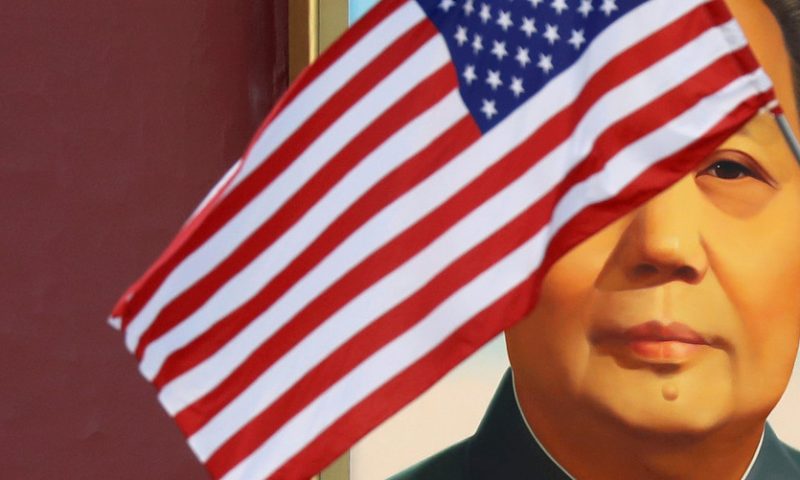 U.S. stocks pulled well off the day’s lows Thursday but the S&P 500 and the Nasdaq finished lower for a fourth session as trade tensions ramped up after U.S. President Donald Trump threatened tariff retaliation on China, which he claims “broke the deal”.

However, some of the fears were assuaged after Trump disclosed that he’s received a missive from Chinese President Xi Jinping just hours before U.S. and Chinese officials were set to resume trade talks in Washington.

Anxiety over the prospect of a deepening trade dispute between the U.S. and China has weighed on stock markets all week, after Trump voiced frustration over the pace of talks in a Sunday tweet. Those fears were compounded Wednesday evening when the president accused the Chinese of negotiating in bad faith and reneging on commitments made in previous rounds of negotiation.

In response, the White House has threatened to raise tariffs on $200 billion in annual Chinese exports to the U.S. to 25% from the current 10% at 12:01 Eastern Time Friday.

The rift has come amid accusations by the U.S. that China has been trying to back out of already agreed measures, prompting Trump to slap higher tariffs on the country. China has taken a tougher stance on negotiations because officials believed the U.S. was ready to compromise, based on recent actions and comments by Trump, The Wall Street Journal reported.

But Trump’s disclosure that he received a “beautiful letter” from Xi and his suggestion that there was scope for a deal helped to ease some of the pressure on the market as Beijing’s top trade envoys, including Vice Premier Liu He, arrived in Washington to resume negotiations.

Before Trump’s Sunday tweet, when greater tariffs were threatened, “our sources in Washington were anticipating a ‘weak’ deal with few genuine Chinese concessions,” wrote James Sweeney, chief economist for Credit Suisse, in a note to clients.

“Moreover, no large institutional investors were predicting — at least publicly — an imminent tariff increase,” he added. “While the tweet led to a selloff in China’s equity markets on Monday, the relatively muted market reaction in Europe and the U.S.A. suggests that a large tariff increase remains a tail risk rather than a base-case scenario.”

“Trade negotiating tactics are clearly being used by both the U.S. and China,” wrote Edward Moya, senior market analyst at Oanda, in a research note. “Give-and-take was to be expected by both sides as we near an ultimate conclusion to a trade deal. Recent obstacles have seen the risk of a total collapse grow which means we could be finally nearing a deal.”

“While the base case remains for a deal to be reached, the timing is uncertain, but likely to occur by early June at the latest.” he added. “If we see a disastrous outcome this week, we could see a 10% correction with U.S. equities. A framework agreement is likely to see stocks attempt another run at making fresh record highs.”

What speakers and data were in focus?

The number of people who applied for jobless benefits in the week ended May 4 fell slightly to 228,000, the Labor Department said Thursday, above the 218,000 expected by economists polled by MarketWatch.

U.S. wholesale prices rose 0.2% in April, below the 0.3% increase expected by economists, per a MarketWatch poll. The annual increase in producer prices remained flat at 2.2%.

The U.S. trade deficit widened in March versus February, but the bilateral deficit with China fell to the lowest level in three years, the Commerce Department said Thursday.

Wholesale inventories in the U.S. fell 0.1% in March, the Commerce Department said Thursday, versus consensus expectations of a 0.3% rise, according to FactSet.

Uber Technologies Inc. UBER, +0.00%  is expected to price its initial public offering later Thursday at “the midpoint or below” its $44 to $50 per share target, The Wall Street reported, (paywall), with its public debut on the New York Stock Exchange to occur Friday.

Shares of Etsy Inc. ETSY, -10.75% sank 11% after the online marketplacereported first-quarter earnings Wednesday evening, with the company reporting profit and sales that grew more slowly that analysts had predicted.

Shares of e.l.f Beauty Inc. ELF, -7.28% slumped 7.3% after the company reported a surprise loss on for the three-month period ended in March on Wednesday evening.

Fox Corp. FOXA, +2.89%  stock advanced 2.9% after the company reported its first quarterly earnings as a stand-alone company, beating analyst forecasts for earnings and sales. Fox was spun off from 21st Century Fox earlier this year, and began trading as its own entity in March.

Gold GCM9, +0.13% settled higher, the U.S. dollar fell against the Japanese yenUSDJPY, -0.07% perceived by investors as a haven investment, and crude oil prices CLM9, +0.41% the declined.

Apple shares are ‘as expensive as ever,’ says Bernstein analyst