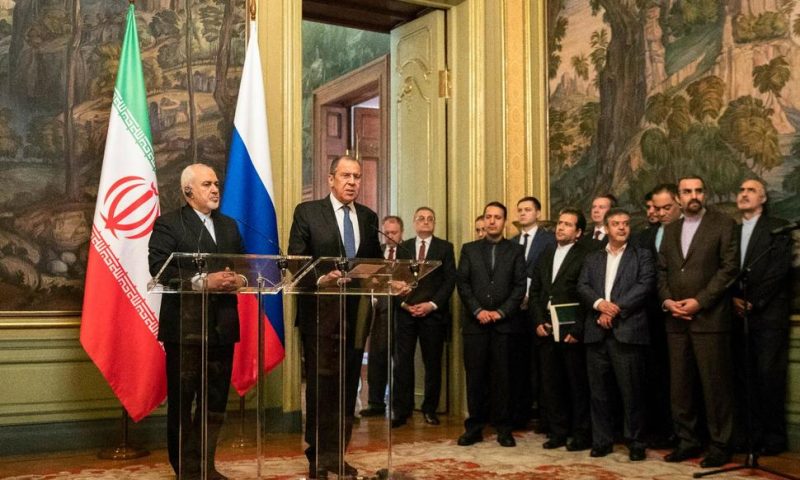 Nations trying to keep alive the deal meant to prevent Iran from getting a nuclear weapon are urging Tehran to back off its threat to resume higher enrichment of uranium.

BERLIN — The world powers struggling to preserve a nuclear deal with Iran are facing an increasingly uphill battle, with a new deadline from Tehran on finding a solution to make up for last year’s unilateral U.S. withdrawal from the accord and the increasing economic hardship that has put on the Islamic Republic.

After Iran notified Britain, Russia, China, the European Union, France and Germany of its intentions in a letter, Iranian President Hassan Rouhani said in a televised address Wednesday that the nations have 60 days to come up with a plan to shield his country from the sanctions imposed by U.S. President Donald Trump after he pulled Washington out of the deal.

“If the five countries join negotiations and help Iran to reach its benefits in the field of oil and banking, Iran will return to its commitments according to the nuclear deal,” Rouhani said.

The 2015 deal, intended to keep Iran from obtaining a nuclear weapon, promised economic incentives in exchange for restrictions on its nuclear activities. Despite efforts so far by the others to keep the deal from collapsing, Iran’s economy has been struggling and its currency has plummeted in value after the re-imposition of U.S. sanctions.

Many international corporations are reluctant to risk running afoul of Washington and have severed ties with Iran; a complicated barter-type system set up by the Europeans to allow their businesses to skirt direct financial transactions with Iran — and thus evade possible U.S. sanctions — is not yet finalized.

Iran has continued abiding by the stipulations of the deal, according to the International Atomic Energy Agency, but had been expressing increasing frustration with the inability of the Europeans to provide economic relief, culminating with Wednesday’s threat to resume higher enrichment of uranium in 60 days unless new terms are negotiated.

Despite Rouhani’s threatening rhetoric and the now-ticking clock, Europeans were cautiously hoping the Iranian president was not on the verge of breaking the deal but instead seeking to show strength domestically as the economy slumps.

German Foreign Minister Heiko Maas said his office had been in contact with all the others involved in the Iran deal, known as the Joint Comprehensive Plan of Action, or JCPOA, since the announcement to see what could be done to get Tehran to back down.

“Our opinion is and remains: We want to preserve the agreement, in particular to prevent Iran from coming into possession of nuclear weapons,” he told reporters. “We don’t need further escalation in the region.”

Similarly, French Defense Minister Florence Parly told BFMTV television that “nothing would be worse than Iran leaving this deal.”

“We absolutely want to keep this agreement alive,” Parly said.

At a meeting with U.S. Secretary of State Mike Pompeo in London, British Foreign Secretary Jeremy Hunt called Iran’s threat “unwelcome” and urged it not to take “further escalatory steps,” while emphasizing Britain was not ready to give up on the JCPOA.

“For as long as Iran keeps its commitments then so, too, will the United Kingdom,” he said.

Hunt said Britain and the U.S. agreed on the need to confront the threat from Iran, but “it’s no secret we have a different approach on how best to achieve that.”

Pompeo was restrained in his own assessment of the letter that Iran sent to the JCPOA group outlining its intentions.

“I think it was intentionally ambiguous,” he said. “We’ll have to wait to see what Iran’s actions actually are. They have made have made a number of statements about actions they have threatened to do in order to get the world to jump.”

In his television address, Rouhani also tried a gambit designed to hit a sore spot for Europe, over the issue of migration and drug-smuggling.

Noting that Iran now cooperates on issues like controlling immigration and targeting Afghan opium and hashish traffickers, he said: “You are obliged … for your own security, for protecting your youths against drugs as well as controlling influx of immigrants.”

There was no immediate response from officials in Europe, which has seen an influx of refugees and migrants from the Middle East in recent years.

China, a key Iranian ally and trading partner, suggested that Washington’s recent decision to deploy an aircraft carrier group and a bomber wing to the Middle East to confront unspecified threats from Tehran had added fuel to the fire.

“We regret that the U.S. has further aggravated the tension on the Iranian nuclear issue,” Foreign Ministry spokesman Geng Shuang said. “We call on all parties concerned to exercise restraint, strengthen dialogue and avoid escalating tensions.”

Russian Foreign Minister Sergei Lavrov went a step further, saying the situation surrounding the fate of the 2015 nuclear accord has been complicated by “irresponsible behavior” from Washington.

After meeting in Moscow with his Iranian counterpart Javad Zarif, Lavrov reaffirmed Russia’s support for the deal and blamed the U.S. for undermining it.

“The U.S. is to blame for the situation and it makes it difficult for both Iran to fulfill its obligations and … for the general state of the nuclear non-proliferation regime,” Lavrov said.

Zarif insisted that Iran’s decision to partially withdraw from certain provisions did not violate the agreement, and asserted it was provoked by U.S. actions toward Iran.

He also said Iran will uphold its obligations if European signatories to the deal uphold theirs.

UK and Ireland Agree on Residency for Citizens Post-Brexit