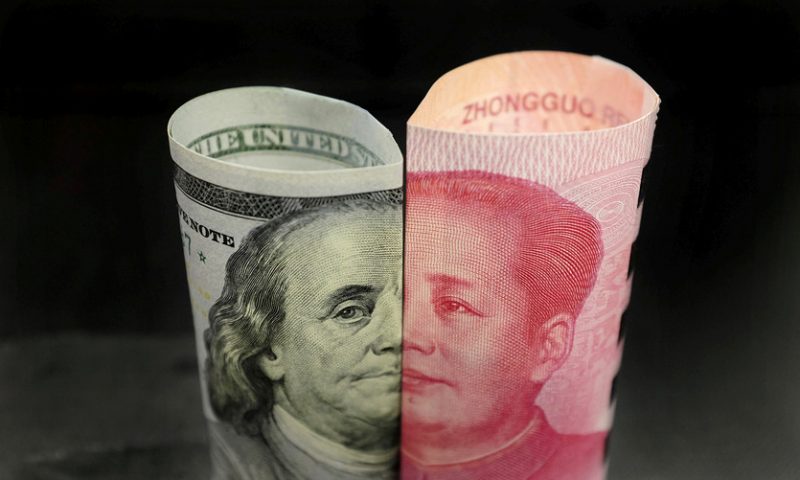 Dow claws back from a deficit of nearly 500 points

U.S. stocks finished lower Monday even in the wake of a dramatic comeback after President Donald Trump threatened over the weekend to increase tariffs on $200 billion of Chinese goods, raising fresh fears about a market-disruptive clash between the world’s largest economies.

The Dow and the broader market briefly dipped below apparent technical support at the 50-day moving average before bouncing back. Moving averages tend to be viewed by technical analysts as bullish and bearish demarcation points.

In a pair of tweets Sunday, Trump expressed frustration over the speed of trade talks with China and threatened to raise tariffs on $200 billion of Chinese goods by Friday to 25% from 10%. “The Trade Deal with China continues, but too slowly, as they attempt to renegotiate. No!” he wrote.

Trade negotiations were set to resume this week between the two countries and last week U.S. officials had seemed hopeful a deal was imminent. Beijing, which has in the past rejected pressure tactics from the U.S., said Vice Premier Liu He’s planned trip to Washington this week could be canceled altogether, according to a report in the South China Morning Post.

The report said other options being considered include delaying the visit by a few days, with chief trade negotiator Liu staying in the U.S. for just a brief period. However, Bloomberg News reported that the Chinese team still planned to go to Washington for talks, which are due to restart on Wednesday, with some hopeful for a deal as soon as Friday.

The development proved a shock to global markets, with investors taking shelter in traditional haven assets such as gold and the Japanese yen.

“If there is one thing the markets dislike, it is the unexpected, and Trump’s tweet caught the markets completely off-guard, sending investors into a risk off frenzy,” said Jasper Lawler, head of research at London Capital Group, in a note to clients. “We know from experience that this could be one of Trump’s infamous negotiating tactics, but there is a good chance that this time it will backfire.”

Chris Weston, head of research at Pepperstone, said markets will be watching carefully to see whether Liu calls off his planned visit to Washington.

“If the visit is formally canceled, then Trump simply has to hike tariffs on the $200 billion of goods to 25%. A fate that will exasperate today’s tightening of global financial conditions, as traders buy volatility and unwind much of the goodwill seen in markets of late and ask what now for the global economy?” said Weston, in a note to clients.

The S&P 500 index “is hovering at a key technical level. After months of gains and a strong earnings season, we’re in a bit of a back to the future situation as trade tensions return to the center stage,” wrote Chris Larkin, senior vice president at E-Trade Financial Corp., in a report. “We could see this being a major driver of turbulence if this morning’s activity is any indication,” he said.

Shares of Kraft Heinz Co. KHC, -0.64%  rose 0.6%, shrugging off news that the food company will have to restate the financial statements in its annual reports for 2016 and 2017, and for each quarterly period for the first nine months of 2018, as it continues to investigate “certain misstatements.”

Anadarko Petroleum Corp. APC, +0.01% confirmed Occidental Petroleum Corp.OXY, -0.05% raised the cash portion of its rival buyout bid, which Anadarko said last week could represent a “superior proposal” to Chevron Corp.’s CVX, -0.59%bid. Shares of Anadarko were up 3.8% while Occidental’s stock was up 1.4% and Chevron shares rose 1%.

Tyson Foods Inc. TSN, +2.61% shares climbed 2.6% after the company said sales in its fiscal second quarter rose 7% to $10.44 billion from a year earlier. Analysts expected $10.28 billion in sales, according to FactSet.

Shares of Boeing Co. BA, -1.32%  fell 1.3% after The Wall Street Journal reported that the aeronautics company didn’t share information about a problem with a cockpit safety alert for about a year before the issue drew attention with the October crash of a 737 Max jet in Indonesia.

Shares of Sinclair Broadcast Group Inc. SBGI, +1.69% soared 35% to a record high, and the biggest one-day gain in 10 years, after the TV broadcasting company’s deal to buy regional sports networks from Walt Disney Co.DIS, +0.37% prompted B. Riley FBR to turn bullish on the stock.

West Texas Intermediate crude-oil prices CLM9, -1.01% and Brent crudeLCON9, -1.21%  recovered from earlier weakness to trade higher. The U.S. dispatched bombers and an aircraft carrier to the Middle East over the weekend over concerns Iranian and Iranian proxy forces were possibly preparing to attack U.S. forces in the region.

As investors sought havens from the global equity selloff, gold pricesGCM9, -0.23% settled higher, while the Japanese yen USDJPY, -0.11%  rose against the dollar.