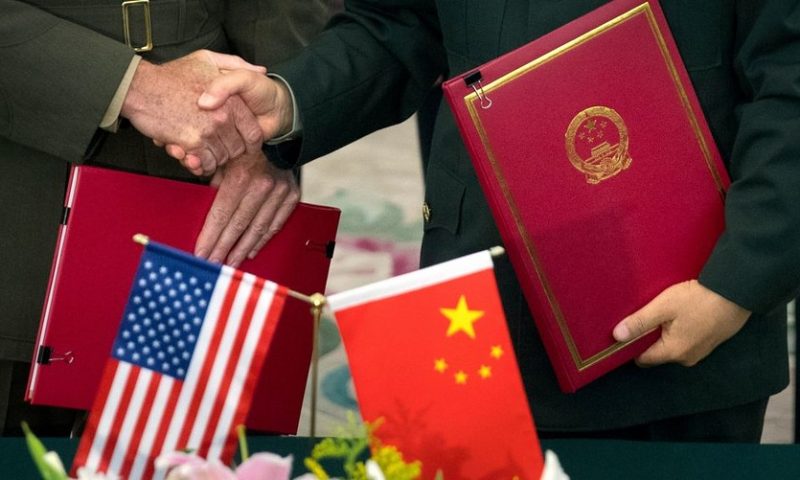 In the first trading session since that tweet went viral, it certainly doesn’t feel totally awesome for traders who were anticipating good news on the trade front. Instead, the president announced Sunday that tariffs on $200 billion in Chinese goods will be increased on Friday to 25% from 10%.

“The Trade Deal with China continues, but too slowly, as they attempt to renegotiate. No!” Trump wrote in the surprise announcement.

Next thing you know, traders couldn’t dump stocks fast enough, and Trump returned to rage-tweeting about collusion and “Angry Democrats.”

But back to what this means for investors.

In our call of the day, Michael O’Rourke, chief market strategist at Jones Trading, suggests the selling might be overdone, considering the market over the past five years has generally taken the most optimistic view of any potential obstacles.

“The challenge for investors,” O’Rourke explained in an note, “is deciphering whether this another bluff by the president, an attempt to lower expectations in order to provide an upside surprise or actually a potential breakdown of the trade negotiations and an escalation of the trade war.”

It looks like skittish investors are approaching his tweet like the latter rather than, as TS Lombard’s Eleanor Olcott described it to Barron’s, Trump merely exercising his “Art of the Deal” tactics to deliver some surprise to the upside.

The equity selling crossed borders, with both Europe SXXP, -0.60% and AsiaADOW, +0.04% caught in the stiff downdraft. The Shanghai CompositeSHCOMP, +0.69% was hit particularly hard, losing 5.6%.

Beyond Meat BYND, +1.85%  last week became the best performing first-day consumer IPO in two decades. The stock’s been able to hold much of those gains, but it’s worth watching this week to see if investors still have an appetite. The team at Renaissance Capital was mostly lukewarm on the meatless product itself. “Pretty good. But not like, 20x-forward-sales-good,” one analyst said.

Boeing’s BA, -1.37% woes continues, with government officials reportedly claiming the company didn’t share information about a problem with a cockpit safety alert for about a year before the issue drew attention with the October crash of a 737 Max jet in Indonesia. After that, Boeing gave some airlines and pilots partial and inconsistent explanations, the Wall Street Journal reported.

Elsewhere on the air travel front, a Russian airliner burst into flames while making an emergency landing at Moscow’s Sheremetyevo airport on Sunday night, killing at least 40 people, officials said. Check out some of the terrifying footage. And reports say the death toll would have been lower if some passengers hadn’t insisted on getting their hand luggage.

Occidental Petroleum OXY, -0.07% said it plans to sell Anadarko PetroleumAPC, +0.01% Africa assets to Total SA TOT, -1.83% if it completes a deal for the company. The announcement is part of Occidental’s plan to sell assets to improve its balance sheet if it can complete its purchase.

Chesapeake Lodging Trust CHSP, +7.51%  after Park Hotels & Resorts PK, -3.40% said it would buy the lodging real estate investment trust in a cash and stock deal worth around $2.7 billion.

Shares of Kraft Heinz KHC, -0.76%  are down after the branded foods company said it will restate the financial statements in its annual reports for 2016 and 2017, and for each quarterly period for the first nine months of 2018.

With the company poised to make one-day delivery the default for Prime members, Amazon AMZN, -0.87% , thanks to significant investments over the past four years, is already able to offer such a speedy response to 72% of the total U.S., including to most households in 16 of the wealthiest and most populated states, according to an RBC Capital report highlight by CNBC.

The map shows the four-year change in Amazon’s vast distribution footprint. The coasts are basically already covered, as is pretty much all of Texas and the big metros of the Midwest. After Amazon announced its plans, RBC said “the faster you ship, the more people buy.”

Incidently, the president retweeted that one.

“So I know what you’re thinking and you’re probably right: This was the best week, for Trump, out of his crisis-soaked 119 weeks in the White House” — Will Bunch, in an op-ed on Philly.com, listing “the reasons that Trump can light up a celebratory cigar on whatever taxpayer-reimbursed golf green he’s bilking us at.”

Nothing of note on the schedule today. In fact, this week’s key report, April CPI, doesn’t hit until Friday. On Tuesday, we’ll get a look at the Job Openings and Labor Turnover Survey for March, followed by the mortgage purchase applications index on Wednesday. Other than that, yes, a pretty quiet data week is on tap.

Apple has bought around two dozen companies in the past 6 months, Tim Cook says