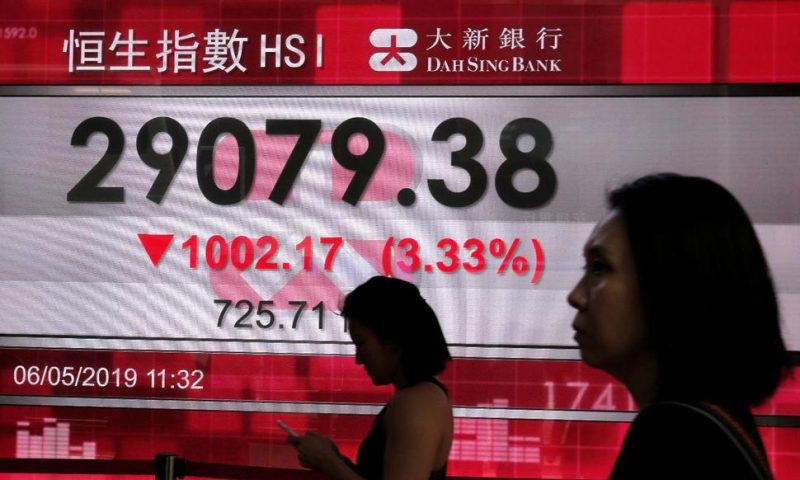 BANGKOK — World markets swooned Monday after President Donald Trump threatened to increase tariffs on imports from China at a time when investors were expecting trade tensions to subside.

Markets opened sharply lower after Trump said via Twitter that he planned to raise tariffs on imports from China to 25% from 10% as of Friday. Complaining that trade talks with China were moving too slowly, he also said he would impose tariffs on $325 billion worth of products from China, accounting for all of its exports.

Trump said “The Trade Deal with China continues, but too slowly, as they attempt to renegotiate. No!”

Trump’s comments in tweets Sunday came as a Chinese delegation was due to resume talks in Washington on Wednesday aimed at resolving a tariffs battle that has rattled world markets.

The Wall Street Journal, citing unidentified sources, said China’s government was considering canceling this week’s talks. But a Chinese Foreign Ministry spokesman, Geng Shuang, said Monday that the delegation was still planning to go. He would not say exactly who might attend the talks.

In other trading, the A-share index on China’s smaller market in Shenzhen plummeted 7.4 percent. Japan’s markets were closed for a holiday, but the future contract for the benchmark Nikkei 225 index lost 2.4%.

Many market players had anticipated news of a possible deal as early as this week in the dispute over Chinese industrial policies and technology. Analysts said Trump’s comments might be a negotiating tactic, but might also make Beijing reluctant to appear as if it was giving in to U.S. demands.

“He (Trump) is trying to show the Chinese a little color, maybe a little punishment. Of course, the effect is catastrophic,” said Francis Lun, a stock analyst based in Hong Kong.

Chris Weston of Pepperstone said markets had been treated to a “genuine shock.”

“However, today’s comments hit us at a time when most were expecting some sort of market-friendly resolution to be formally announced in the next two weeks,” he said.

The revived tensions over trade pulled oil prices lower. Benchmark U.S. crude shed $1.26, or 2%, to $60.68 per barrel in electronic trading on the New York Mercantile Exchange. It gained 13 cents to $61.94 per barrel on Friday.

In currency trading, the Japanese yen, viewed as a safe haven for investors, advanced against the U.S. dollar. The greenback was trading at 110.74 Japanese yen by midday Monday, down from 111.11 yen on Friday.

US deploys aircraft carrier and bombers after ‘troubling indications’ from Iran