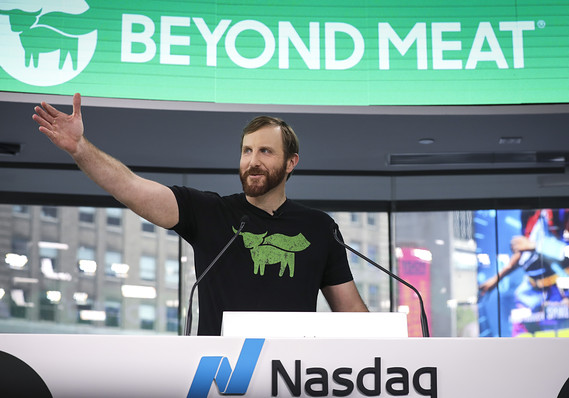 Beyond Meat shares jumped in Friday trading after soaring 163% on Thursday for the biggest U.S. IPO since 2000

“We want to make the existing product on the shelves obsolete,” Brown told MarketWatch after the company’s IPO.

Beyond Meat BYND, +1.58% aims to “separate meat from animals” and position the newly-public business as a global protein company.

Beyond Meat shares priced at $25 on Wednesday and began trading Thursday on the Nasdaq at $46. Prices neared $73 at their intraday peak. Beyond Meat closed at $65.75 Wednesday.

Brown says there are four factors that are driving consumers to Beyond Meat: health, climate (such as worries about emissions), environment (such as sustainability) and animal welfare.

For those ages 40 and older, Brown says the health implications are the biggest reason consumers are making the transition. For millennials, who are driving increased vegetarian, vegan and plant-based dining, the environment is the biggest reason.

“It’s ubiquitous on social media,” Brown said. “It’s not foreign to them to get ‘meat’ from plants.”

Beyond Meat faces competition from companies like Boca Foods, Gardein and Morningstar Farms. And there are plant-based meal kits like Purple Carrot, which got a $4 million investment from Fresh Del Monte Produce Inc. FDP, -0.21% in May.

Increased interest from diners is also driving more plant-based and vegetarian options to fast-food chains that are best-known for beef burgers. Burger King, part of the Restaurant Brands Inc. QSR, +1.69% portfolio, just announced that it will be taking the meatless Impossible Whopper national later this year after successful pilot testing. And major food companies like Conagra Brands Inc. CAG, +0.20% are adding choices for those with alternative dining preferences, including vegan and plant-based.

Now that Beyond Meat is public, Brown said the company will focus on its Go Beyond campaign, which currently features basketball star Chris Paul as an ambassador.

“We sought to go public slightly earlier, but the government shutdown, markets and life just got in the way,” Brown said. “Now this is the right step for us.”

Stock market fear is here, but is it fear of a meltdown or of missing out?