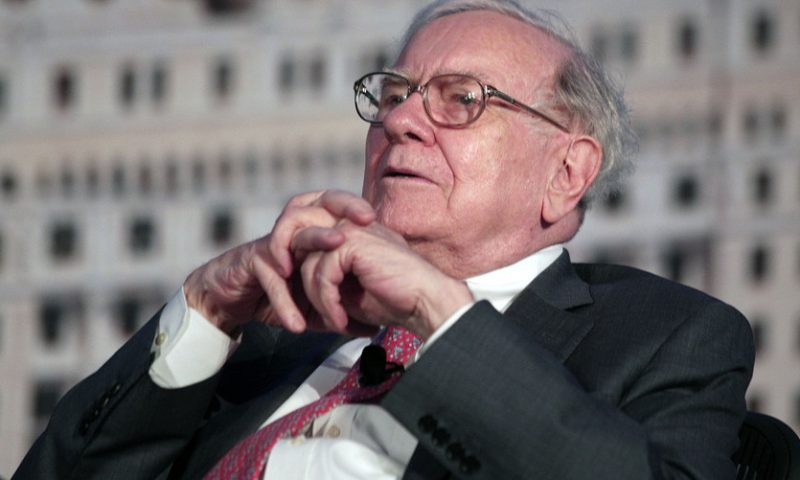 There will be no coasting into the weekend, with Friday looking like a kitchen-sink kind of day for investors.

What we lack in big earnings news, with the bulk now past us, we’ll make up with data as big U.S. jobs numbers roll in, stronger than forecast, and then later we’ll get an ark full of Fed speakers. On Saturday, we’ll get Berkshire Hathaway’s BRK.A, +1.10% BRK.B, +1.24% annual meeting, and a chance to tap into the thinking of an all-time investing legend, the conglomerate’s billionaire chief executive and chairman Warren Buffett.

The so-called Sage of Omaha has already been busy, with Amazon AMZN, +3.24% up after he told CNBC late Thursday that “one of the fellows in the office that manages money… bought some” shares of the e-commerce giant. While Buffett himself didn’t push the button on that trade, he admitted being “a fan” and ”an idiot for not buying” the e-commerce giant before.

Our call of the day, from Byron Lotter, portfolio manager at South African-based Vestact Asset Management, says Berkshire’s latest move holds an important lesson for investors, given the company has traditionally focused on value-oriented companies — stocks that tend to trader cheaper than fundamentals would warrant — and Amazon’s share price is fairly eye-popping.

“Look forward, don’t look back at what the share price has done. Looking at the company’s history is important, and just because it’s gone up and it’s done incredibly well, don’t let that deter you from buying a share,” Lotter told MarketWatch, in a telephone interview on Friday.

He said if Berkshire isn’t scared off by the fact Amazon shares trade at $1,900 each, neither should investors get intimidated by a share price, and sit on the sidelines because they think they’ve missed out.

“Investors think that because a share is trading at an all-time high and has a market cap of a trillion dollars, Berkshire wouldn’t be buying Amazon,“ he said. “When we were buying (Amazon) at $350 we thought it was high.”

“There’s still huge potential for this company. You have to look at where you think the company is going. Cloud services is in its infancy and so is online retail,” said Lotter.

He’s also a fan of Google parent Alphabet Inc. GOOG, +1.96% GOOGL, +1.98% which has seen a rough ride this week on disappointing earnings.“Google is growing at an expected 20% per annum, trading at 19 times earnings. In my opinion, it’s offering a lot of value.”

And another lesson from the Sage of Omaha? It also may be time for value investors to change their thinking a little. Berkshire has long stuck to companies that are considered less risky, with slow and steady growth, like American Express and Coca-Cola. That’s as opposed to growth stocks, companies with strong momentum like Amazon and Apple, which Berkshire also dipped into back in 2017 for the first time. Both those stocks though, have value qualities, argues Lotter.

“In this day and age, with so much information out there, and markets so transparent and liquid, if you stay in that deep-value box, you’re going to miss out and underperform the markets ,” said Lotter. “Gone are the days when you can find a quality company that has good potential trading at 10 times earnings.”

The dollar DXY, -0.36% is up, along with gold US:GCU8 and crude US:CLU8 is also up. Oil logged the lowest finish in a month on Thursday.

Europe stocks SXXP, +0.39%  are mostly higher as a batch of companies report. Asian equities had a cautious session, with China and Japan stocks still out for a holiday.

U.S. payrolls for April jumped 263,000, better than forecast, and the jobless rate hit a 49-year low, while hourly wages rose. After that, the Markit services purchasing managers index, the Institute for Supply Management’s nonmanufacturing index.

Jesse Felder, of The Felder Report says investors have been shying away from riskier sectors of the stock market, and that could mean this year’s rally could prove unsustainable. Here’s his chart and our chart of the day:

The chart stacks up the S&P 500 and a custom index Felder made to track sector preferences. When investors are embracing riskier sectors, that red line moves up, though those lines have been diverging this year. He said that also happened at the stock market’s top in 2007 and at last summer’s new high.

Wild about non-meat. Plant-based meat maker Beyond Meat BYND, +1.58% is up another 13% after shares soared 163% in its Wall Street debut on Thursday, the biggest IPO pop since 2000.

In the U.S., earnings news is slowing to a trickle. U.S. Steel X, +17.30%  shares are up on profit news, while shares of travel group Expedia EXPE, -0.88%  and videogame publisher Activision ATVI, -4.84%  are down on disappointing results.

9.1% — That marked the first-quarter return for Norway’s $1 trillion sovereign wealth fund, marking the best-ever quarter for the biggest such fund in the world. The Government Pension Fund Global is managed by Norges Bank, which credited a strong bounce for global stocks to that hefty gain, specifically tech stocks.