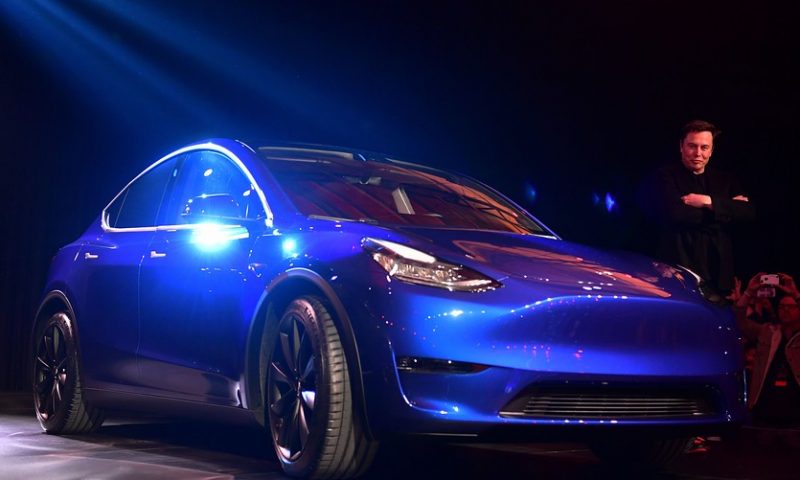 Company to return to profitability in the third quarter, executives say

Tesla Inc. late Wednesday posted a wider-than-expected first-quarter adjusted loss and missed revenue forecasts, but Wall Street zeroed in on some of the promises that company executives made during their call with analysts, including that the car maker would be profitable again this year.

Revenue reached $4.5 billion, compared with $3.4 billion a year ago.

Analysts polled by FactSet had expected an adjusted loss of $1.15 a share on sales of $5.4 billion for the quarter. The per-share loss forecast had widened in recent days, and comes after Tesla reported third- and fourth-quarter GAAP and adjusted profits.

The stock wavered between gains and losses in the extended session Wednesday after ending the regular trading day down 2%. It was recently 0.3% higher after hours.

“I’m not surprised to see the stock flattish after the release because expectations were so low heading into it, with the stock down more than 22% year to date,” said Garrett Nelson, an analyst with CFRA.

“This has always been a hope stock, and it appears that (Chief Executive Elon) Musk has provided enough hope with the potential of the Autopilot technology, possible upside to sales guidance and introduction of an insurance product for the stock to tread water in the aftermath of the release,” he said.

Tesla ended the quarter with $2.2 billion in cash, $1.5 billion less than in the end of 2018, thanks to a $920 convertible-bond payment and an increase in the number of vehicles in transit to customers at the end of the first quarter, the company said in a letter to shareholders.

After tweaking prices on its vehicles, Tesla lost a net $121 million loss because of increases in the forecast return rates for cars sold under its residual value guarantee and buyback guarantee programs, “as well as inventory write-downs for used and service loaner inventory,” the company said in the letter.

Tesla also lost $67 million thanks to a combination of restructuring costs and other nonrecurring charges, it said. Tesla has announced layoffs for this year as it expects to close some underperforming stores and has shifted sales to online-only.

At the call with analysts, Musk said that more than half of Tesla’s first-quarter deliveries occurred in the last 10 days of the quarter, making it for “the most difficult logistics I have ever seen, and I’ve seen some tough ones.”

As a result, large number of vehicle deliveries were shifted to the second quarter, affecting the first quarter’s net income as Tesla “could not get the vehicles to customers in time,” Musk said. Tesla is working on balancing out its overseas and North American deliveries, which will put much less strain on Tesla, result in a much better delivery experience for customers, and have a “very positive” effect on the company’s working capital, Musk said.

Tesla could return to making a profit by the third quarter, Chief Financial Officer Zachary Kirkhorn said on the call. Tesla’s vehicle-price adjustments put pressure on margins, which will still be felt in the second quarter, he said.

Tesla is “working extremely hard and making terrific progress on improving the cost efficiency of the business without sacrificing growth,” Kirkhorn said.

Musk had said last month that Tesla was likely to return to profits in the second quarter of the year.

In the call, Musk also clarified that Tesla will continue to have stores and even open new locations, but it would close stores with low foot traffic. Customers will still order vehicles only online, with stores “essentially information centers,” where people would buy Tesla merchandise, test-drive cars, and get more information about the vehicles, Musk said.

Musk also said that Tesla is still deciding where to build the Model Y, the compact SUV it unveiled earlier this year. It’s a “tough call” between California and Nevada, he said, either at Tesla’s Fremont, Calif., factory or at its battery factory outside of Reno, Nev.

Tesla expects to reach a final decision very soon, and in the meantime all tooling and equipment for the Model Y are being ordered and the question of where to build it is not expected to delay production, he said.

The company expects to introduce an insurance product in about a month, Musk said, in order to take into account Autopilot, Tesla’s suite of advanced driver-assistance systems.

Tesla reaffirmed its prior outlook of delivering 360,000 to 400,000 vehicles this year, and said that vehicle production would be “significantly higher” than deliveries. It said it continues to target a 25% non-GAAP gross margin on Model S, Model X and Model 3 vehicles.

Tesla unveiled a computer designed in-house for autonomous driving, and Musk vowed to have a fleet of “robotaxis” as early as next year in some locations, pending regulations.

Like Amazon, these stocks have 100% buy ratings from analysts