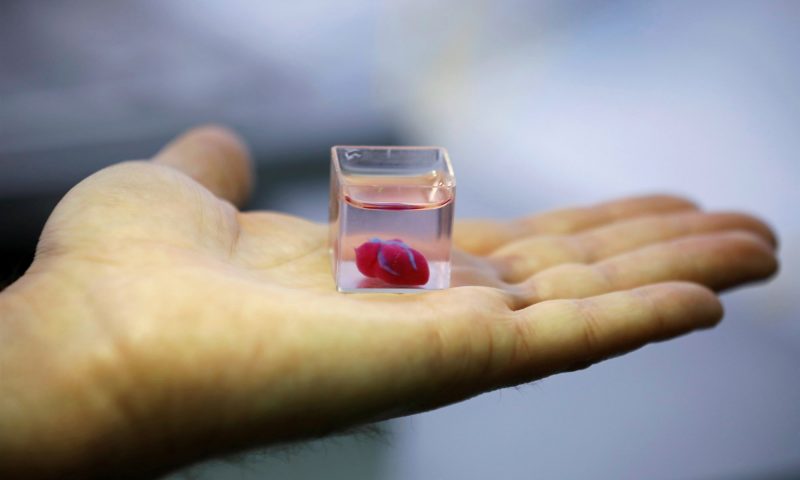 The team created a cell-containing “bioink” and used it to 3D print the organ layer by layer.

Israeli researchers have created an entire 3D-printed heart made from human cells in what they say is a world first.

The heart doesn’t beat and is too small for use in people — it’s only about the size of a rabbit’s heart. But the little organ is considered a big advance in the ongoing effort to find new treatments for heart disease, the leading cause of death in the United States.

Heart transplantation is currently the only good option for people with severe heart failure. But donor organs are in such short supplythat, on average, 18 Americans die each day before one becomes available. Being able to 3D-print a human heart when needed could conceivably help save many lives that are now lost.

“Maybe, in 10 years, there will be organ printers in the finest hospitals around the world, and these procedures will be conducted routinely,” Tal Dvir, a researcher with Tel Aviv University’s School of Molecular Cell Biology and Biotechnology and the leader of the team of scientists who created the heart, told NBC News MACH in an email.

A paper describing the research was published Monday in the journal Advanced Science.

Previously, scientists were able to 3D-print heart structures that lacked cells or blood vessels. But the new 3D-printed heart contains cells, blood vessels, chambers and other structures a heart needs to function normally. To make it, Dvir and his team took fatty tissue from patients and converted the fat cells into stem cells. These were added to a gel and then further processed until they turned into heart cells. The cell-containing “bioink” was added to a 3D printer and used to build the experimental organ layer by layer.

Tal said the next step for his team would be to explore ways to “teach” 3D-printed hearts to function normally and then transplant them into rats to see how well they work. The scientists will also explore the feasibility of 3D-printing larger hearts, with the ultimate goal of building functional human hearts.

“There are many questions and technical hurdles that need to be addressed,” James Yoo, a professor at the Institute for Regenerative Medicine at the Wake Forest School of Medicine in Winston-Salem, North Carolina, said in an email.

Yoo said it’s not clear that a printed heart of this sort could withstand the flow of blood under high pressure or that the printed structures would remain stable after implantation in the body. And he expressed concerns over the real-world feasibility of the “complex” process of cellular manipulation used to create the bioink — though he called the heart “a great advance in the field of bioprinting.”

“A successful bioartificial organ that is implanted in a human will be a major medical breakthrough,” she said in the email. “This is certainly a step that could lead to a breakthrough, but we aren’t there yet.”