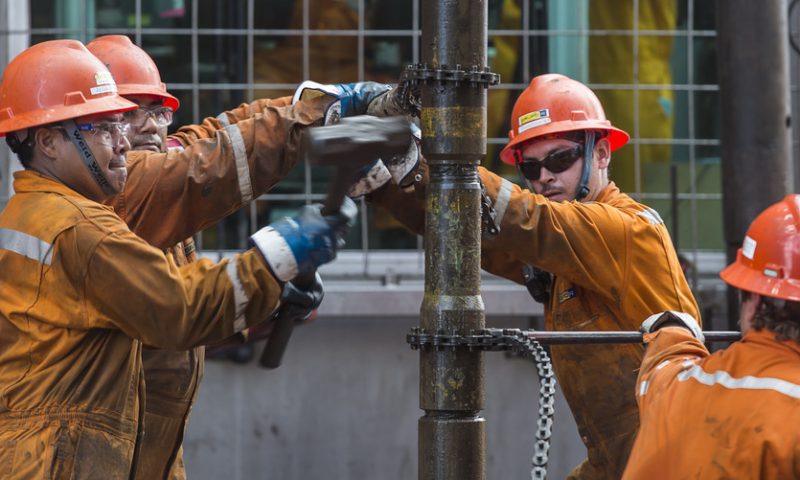 ‘There is a dilemma’ says Russia’s Siluanov

Oil futures ended lower Monday on the heels of a multiweek climb, as a Russian official reportedly questioned his country’s participation in the OPEC-led production cut deal on concerns over market share.

West Texas Intermediate for May delivery, the U.S. benchmark crude, on the New York Mercantile Exchange CLK9, -0.11% fell 49 cents, or 0.8%, to settle at $63.40 a barrel. It rose last week, marking a sixth straight weekly gain.

“We had a stellar rally in the oil market,” Naeem Aslam, analyst at ThinkMarkets UK, told MarketWatch. “The [year-to-date] performance is astonishing and investors feel that they need to take some profit off the table.”

On Saturday, Russian Finance Minister Anton Siluanov was quoted by the TASS news agency as saying, according to Reuters: “There is a dilemma. What should we do with OPEC: should we lose the market, which is being occupied by the Americans, or quit the deal?” Siluanov said such a move could drive the price of oil to $40 a barrel or below, the report said.

U.S. crude production remains in record territory, at 12.2 million barrels a day for the week ended April 5, according to recent data from the Energy Information Administration. In a monthly report issued Monday, the government agency said crude-oil production from seven major U.S. shale plays is forecast to climb by 80,000 barrels a day in May to 8.46 million barrels a day, from 8.38 million in April.

The Organization of the Petroleum Exporting Countries and its allies, primarily Russia, agreed to reduce output by 1.2 million barrels a day for six months beginning Jan. 1. OPEC and its allies are set to meet near the end of June. The reduction in output has been credited with helping to fuel a sharp rally that is taken WTI, up by around 40% so far this year, while Brent has soared nearly 32%.

Analysts at Commerzbank said a tight global supply situation continues to underpin crude prices — and appears to be luring in speculators, as reflected by government data showing a continued increase in net long positions held by speculators. Those positions, which are seen as vulnerable to unwinding if prices move sharply against weak-handed traders, hit their highest level since October in the week ended April 9 for both WTI and Brent futures, they said.

Oil futures peaked in October before suffering a brutal fourth-quarter selloff. “No similar slump is likely just now – at least for as long as the oil market remains tight. If this were to change, for example if OPEC decided to expand its supply, and if speculative financial investors closed their net long positions in response, there would be a risk of the price correcting,” the Commerzbank analysts said.

For now, an “increase in the U.S. rig activity (due to higher oil prices)…has also impacted the price,” said Aslam. Baker Hughes BHGE, -1.63% on Friday reported a second weekly increase in a row for the number of active rigs drilling for oil.