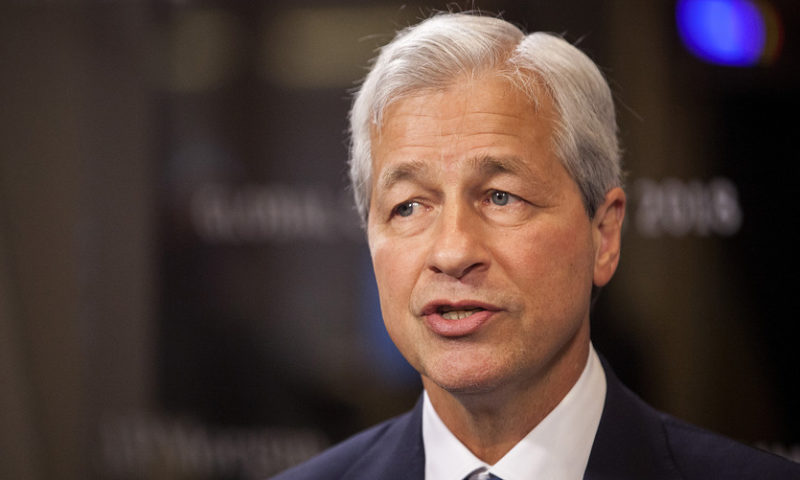 ‘There’s no law that says it has to stop,’ Dimon says

Think of it as the Dimon rally. Stocks were posting a healthy jump on Friday that has helped to erase weekly losses for the S&P 500 and the Nasdaq, and brought all of the major U.S. stock benchmarks within shouting distance of all-time peaks.

The rally comes as corporate results from bellwethers of the banking sector produced rosier-than-expected performance figures in the first three months of the year, kicking off an earnings season that has many Wall Street participants bracing for less-than-stellar reports from U.S. companies amid signs of an economic slowdown here and abroad.

However, JPMorgan & Co. JPM, +4.69% Chief Executive Jamie Dimon may have provided at least some added support to market sentiment, if his bank’s results didn’t already, with his comments on Friday about the state of the economy: “There’s no law that says it has to stop,” Dimon said about U.S. prosperity during a Friday call to discuss quarterly results with analysts.

Of course, the bank CEO said the unresolved trade dispute between the world’s largest economies — China and the U.S. — could pose a threat, but suggested that the current sanguine phase for the market — in its 10th year of a bull run — could continue for another decade.

“We do make a list, and look at all the other things, geopolitical issues, lower liquidity. So there may be a confluence of events that somehow caused the recession, but it may not be in 2019, 2020, 2021. Obviously at one point though it would probably be something, and yeah, I think the bigger short-term risk would be in China, the trade issue in China. So I just wouldn’t count on their having to be a recession in the short-term, 10 years,” he said.

Of course, Dimon’s comments were far from the only factor helping equities maintain their current measure of buoyancy. Optimism over an announced $33 billion merger between Chevron Corp. CVX, -4.94% and Anadarko Petroleum Corp. APC, +32.01% and rally in shares of Walt Disney & Co. NFLX, -4.49% following its bid to launch a video-streaming offering to rival Netflix Inc. NFLX, -4.49% also have jolted stocks higher.

If this can be considered a Dimon-pegged run-up for stocks, it wouldn’t be the first time. The JPMorgan CEO is associated with the so-called “Dimon bottom”, when on Feb. 11, 2016, he bought 500,000 shares of his company’s stock at what turned out to be the lowest point of the year.