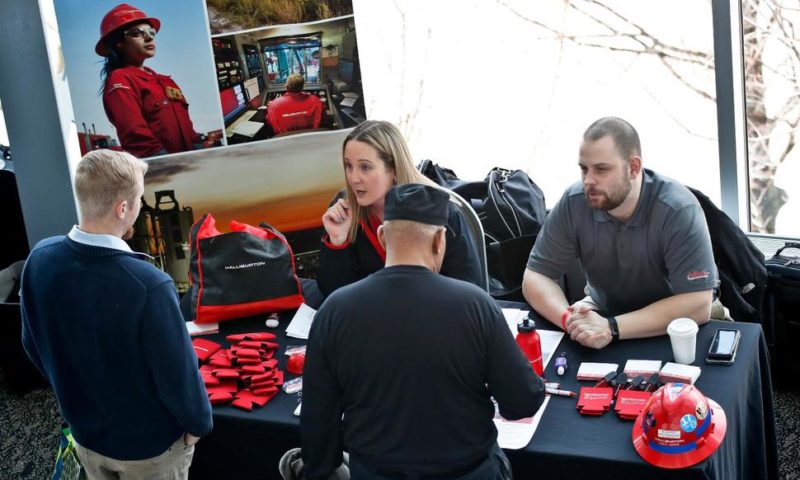 March hiring gain may reflect a downshift to a more durable pace of US growth.

WASHINGTON — A month ago, many economists fretted that the 10-year U.S. expansion looked wobbly. But after the government reported Friday that hiring rebounded in March, the economy suddenly looks sturdy again.

Growth has weakened since last year to something closer to the modest pace that has prevailed for most of the nearly decade-long expansion. The jolt from the Trump administration’s 2017 tax cuts and greater government spending last year has faded. And the global economy has swiveled from a driver of the U.S. economy to a headwind.

Yet last month’s solid job gain of 196,000 may also help undercut any lingering fears that a recession might arrive over the next year or so. The economy’s slow but steady pace of growth is likely to keep inflation low and perhaps sustain the expansion, which is set to become the longest on record in July.

By historical measures, the expansion has fallen short of the sometimes-explosive growth that businesses and workers enjoyed in the past but that often led to financial bubbles or economic excesses — and eventually a recession.

“Lackluster means that you’re not overheating,” Josh Wright, chief economist at recruiting software maker iCIMS, said of the current expansion. “It’s more stable, and we’ll have fewer imbalances. It looks like we’ll be able to prolong this recovery even further.”

In its monthly jobs report Friday, the government also said the unemployment rate remained near a five-decade low of 3.8% in March.

So far this year, job growth has averaged a decent 180,000 a month. That is down, though, from last year’s 223,000 monthly average. And it marks the lowest three-month average gain since November 2017, before the tax cuts took effect.

Wage growth also slipped a bit in March, with average hourly pay increasing 3.2% from a year earlier. That is down from February’s year-over-year gain of 3.4%, the best in a decade.

Investors took Friday’s jobs data in stride. The stock market was up slightly in afternoon trading, extending a rally that has lifted the financial markets this year.

Given that that hiring and wage growth aren’t growing so fast as to threaten high inflation, the Federal Reserve is likely to stay on the sidelines indefinitely, forgoing interest rate hikes, economists said.

As recently as December, Fed officials had forecast that they would raise rates twice this year. But in March, after financial markets turned volatile, inflation showed signs of slipping, and concerns grew about the global economy, the Fed said it would likely keep rates unchanged in 2019.

Yet the jobs data also provides little reason for the Fed to cut rates, analysts said, despite President Donald Trump’s repeated calls for the Fed to do just that. On Friday, Trump went further, urging the Fed to renew the bond-buying program it had used to lower longer-term borrowing rates earlier this decade after the Great Recession. The program was known as “quantitative easing.”

“Our country’s doing unbelievably well economically,” Trump said. But Fed policymakers “really slowed us down,” and if they dropped rates and resumed buying bonds, “you would see a rocket ship.”

Quantitative easing was an emergency tool that the Fed, under Chairman Ben Bernanke, used to buy trillions in government bonds and other securities. The third and last round was launched in 2012 when the unemployment rate was still 8%.

The Fed’s policies probably contributed to another shortcoming of the current expansion: It has benefited wealthier Americans more than others. That’s because the Fed’s QE program, by holding down rates on Treasury securities, led many investors to put more money into stocks, raising their values.

The stock market has tripled since bottoming a decade ago, benefiting the richest one-tenth of Americans, who own about 80% of the value of U.S. shares. Home equity, a much more vital source of wealth for the middle-class, has recovered much less.

And many households remain gripped by financial insecurity despite the steady pace of hiring. Forty percent of workers earn less than $16 an hour, according to government data analyzed by the Economic Policy institute. In March, hiring did pick up in higher-paying sectors, such as professional and business services, which added 37,000 jobs in engineering, IT services, accounting and other fields.

Manufacturers did not fare as well, cutting 6,000 jobs, the sector’s first decline in a year and a half, mostly because of layoffs by General Motors. Construction firms added 16,000 jobs.

One factor that may weigh on hiring in the coming months is a dwindling supply of workers in the healthiest job markets. Charles Dunlap, who owns an accounting firm in Houston with a partner, has found it much harder to find a new bookkeeper than he did the last time he filled the position, in late 2016.

Back then, advertising mostly by word of mouth turned up unsolicited requests for interviews and candidates with advanced degrees. Now, Dunlap has interviewed only three potential hires this year, despite raising the job’s starting pay about $2 an hour to roughly $15.

Like hiring, growth is also expected to decelerate this year, to about a 2.25% pace, down from 2.9% in 2018, the fastest expansion in three years. In the much more rapid expansion in the 1990s, growth topped 4% for four years.

Consumers have helped drag down growth, with retail sales falling in February and a broader measure of consumer spending slipped in January. Businesses have also reined in their spending on industrial machinery and other equipment and on factories and other buildings.

And in Europe and Asia, weaker economies have reduced demand for U.S. exports. Europe is on the brink of recession, with its factories shrinking in March at the fastest pace in six years, according to a private survey.

“The U.S. is much more isolated from those factors than other countries,” Millar said. “We have a relatively closed economy.”

Corporate profits also appear to be rebounding after stalling out in the first three months of this year.

Analysts expect S&P 500 companies to report a drop of nearly 4 percent in their first-quarter earnings per share from a year earlier, according to FactSet. It would be the first decline in nearly three years.

But Steve Chiavarone, an equity strategist at Federated Investors, pointed to encouraging reports recently on China’s economy and U.S. manufacturing, along with central banks around the world easing up on interest rates.

“Over the last few days, you’ve seen 2019 and 2020 earnings estimates rise for the first time since September,” Chiavarone said.