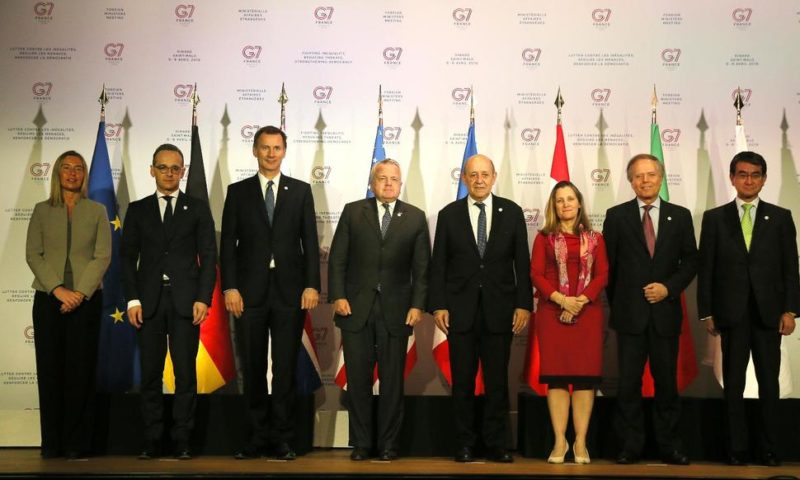 At the end of a two-day meeting in Paris, the G-7 ministers agreed to grant asylum to certain refugees and to return other migrants who are not entitled to stay back to their home countries.

It’s a theme that could dovetail well with the group’s foreign minister meeting, hosted through Saturday by French Foreign Minister Jean-Yves Le Drian in the Brittany seaside town of Dinard.

The G-7 — which includes the U.S., France, Canada, Japan, Germany, Italy and the U.K. — is hoping to produce another joint statement by Saturday on the fight against trafficking drugs, arms and migrants in Africa’s troubled Sahel region.

That meeting also aims to forge commitments on fighting cybercrime and stopping sexual violence against women in conflict zones, especially in Africa.

“We will talk about big regional crises that weaken societies and harm the most vulnerable,” Le Drian said Friday as he opened the foreign ministers’ meeting.

Doubts have been raised this year about the relevance of the G-7 meetings, given that the ranking U.S. officials, Homeland Security Secretary Kirstjen Nielsen and Secretary of State Mike Pompeo, didn’t attend.

As he wrapped up the Paris meeting, French Interior Minister Christophe Castaner acknowledged some differences between the G-7 countries but cited success in “laying down concrete guidelines on key security issues.”

The ministers also discussed divergent views on how to handle foreign fighters who joined the Islamic State militants in Syria and Iraq.

The U.S. wants countries to take back their citizens but Western countries, including France, have largely refused to do so and want them to go on trial in the places where they committed their crimes. Germany, however, raised the idea of creating a specific international criminal court to try them.

All G-7 countries stressed a commitment to “ensure that all foreign terrorist fighters who are or were in conflict zones are held accountable for their actions.”

On Thursday, the G-7 interior ministers met with representatives of Facebook, Twitter, Google and Microsoft and asked them to establish protocols to better combat terrorism, for instance by removing extremist content in emergency situations.

U.S. Homeland Security official Claire Grady said there is “potentially” more room to regulate giant internet companies but stressed that the U.S. wants any changes to preserve the spirit of innovation and keep open opportunity for small companies.

The ministers’ meetings in Paris and Dinard aim to lay the groundwork for a G-7 summit that France will host in Aug. 25-27 in the southwestern city of Biarritz.