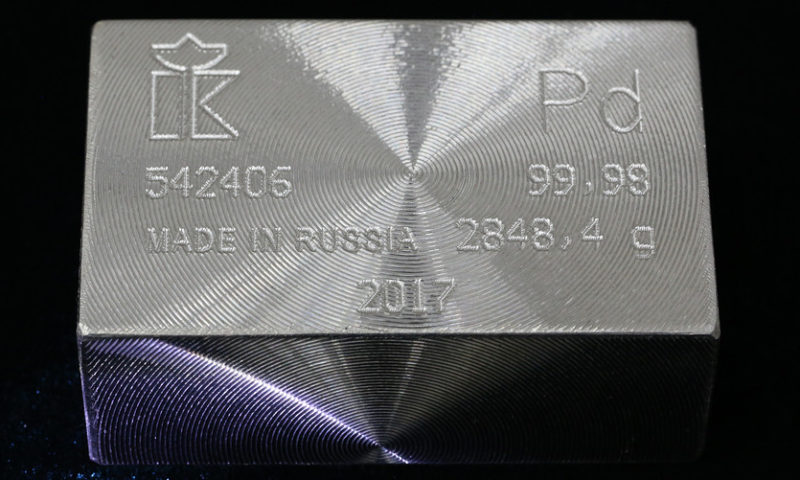 Palladium futures suffered Thursday from their sharpest daily dollar decline on record, losing nearly $112 an ounce for the session to mark a significant retreat from a recent string of record settlements tied to an expected surge in auto-industry demand.

Mark Cutifani, Anglo American’s NGLOY, -1.10% chief executive officer, said the recent rapid rise in palladium’s price has created a “bubble,” but he also believes the value of the metal is likely to remain high for some time, according to a report from the Financial Times, dated Wednesday.

Immediately after the bubble comment from Cutifani, the European folktale “Henny Penny,” commonly known in the U.S. as “Chicken Little,” has “been visited upon palladium prices,” said R. Michael Jones, president and CEO of Platinum Group Metals, highlighting a well-known phrase from the story: “The sky is falling!”

A “drop in Chinese car sales was the added a nut falling from the sky—and down goes the price,” Jones said. But “the facts are that supply is tight and falling, demand is growing.”

Just over a week ago, futures prices for the most-active contract settled at a record $1,560.40. They’ve lost 16% since then.

“The tighter emissions standards in Europe and elsewhere has led to part of the [recent] increase, but the Russia export restrictions have been the real driver,” Jeff Wright, executive vice president of GoldMining Inc., told MarketWatch.

Prices for the metal have climbed four months in a row through February on tight supplies and expectations for strong demand from the automobile sector because palladium is mostly used in pollution-controlling catalytic converters on gasoline-powered vehicles.

“It does appear as if the palladium market is possibly seeing some selling interest from headlines touting the potential for ‘industrial rotation’ from palladium to platinum because of the recent differential of $700 between the two metals,” said analysts at Zaner Metals, in a note on Wednesday. Platinum is now much cheaper than palladium, and speculation that the industry may soon reach a point where it will be worth it to use platinum instead of palladium has grown.

On Wednesday, Wright said he believes the metal “has had a normal correction, as demand while up is not dramatically up or changed.” However, more electric vehicles “will taper demand for palladium and long term, I am in lithium over palladium or platinum.”