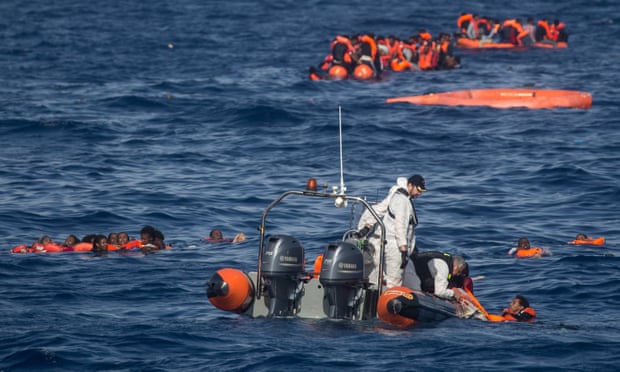 Air patrols will continue after decision, which was driven by threat from Italy to veto entire rescue operation

The European Union is to stop the sea patrols that have rescued thousands of refugees and migrants from the central Mediterranean, after Italy’s populist government threatened to veto the entire operation.

Operation Sophia, which has two vessels and five planes and helicopters, was set up in 2015 to prevent loss of life at sea in a year when 3,771 people died or went missing attempting to reach Europe in rickety boats.

The sea patrol element of the operation will end on 30 September, though air patrols will be stepped up. The mission will also continue training the Libyan coastguard – part of a controversial strategy that critics say leads to people being trapped in Libyan detention centres, where they suffer horrific abuse.

The future of the mission, which was due to expire this Sunday, became tangled up in an argument over which EU country should take in those rescued at sea.

Diplomats agreed a compromise that would extend Operation Sophia’s mandate for six months, while suspending sea patrols. “The alternative was to close the operation,” the official said.

Italy has refused to take in people from search-and-rescue ships since its government came to office last June. The country’s deputy prime minister, Matteo Salvini, has declared Italian waters closed to rescue boats, leaving a series of NGO vessels and their stricken passengers stuck at sea with nowhere to land.

In response, groups of EU member states have formed coalitions of the willing to take rescued migrants once the ship has docked at another port.

The EU would like to turn these ad-hoc arrangements into a semi-permanent disembarkation scheme, but the plan has faltered on arguments over who should bear the responsibility for taking in people and processing asylum claims.

A spokeswoman for the EU’s foreign policy chief, Federica Mogherini, acknowledged that Operation Sophia would be less effective without boats. “Operation Sophia is an essential part of the European Union’s work to dismantle the business model of traffickers and improve the overall maritime security and stability in the central Mediterranean,” she said.

“Member states have decided to extend the mandate of Operation Sophia for six months with a temporary suspension of its naval assets while member states continue working on a solution related to disembarkation.”

“It’s true that Operation Sophia is a maritime operation and it is clear that without naval assets the operation will not be able to effectively implement its mandate, but the decision has been taken by the member states.”

“It shows again that the EU considers it acceptable to let people die at sea as a deterrence for migration, instead of providing adequate search and rescue capacity and agreeing on a disembarkation system which prioritises saving lives and gives people a chance to apply for asylum,” said MSF humanitarian affairs adviser, Hassiba Hadj-Sahraoui.

Meanwhile, prosecutors in Rome have opened an investigation into kidnapping after the Italian government prevented the disembarkation of 47 people from a migrant rescue boat in January.

Prosecutors did not name anyone in their investigation, but in a similar case earlier this year a court ruled that Salvini should be tried on kidnapping charges. In a vote last week, Italian senators voted to defend Salvini’s parliamentary immunity and blocked the case against him.

US Stocks Stumble, Erasing Some of the Prior Day’s Gains