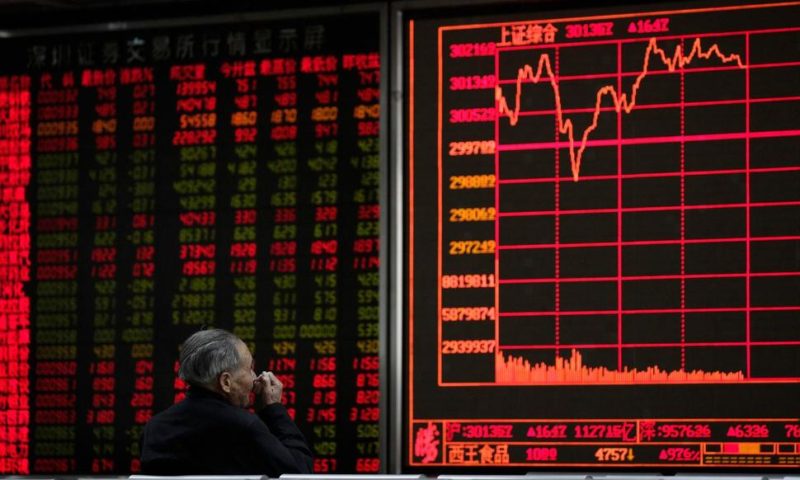 China reported a drop in industrial profits in the latest evidence of softening growth in the world’s No. 2 economy.

The National Bureau of Statistics reported Wednesday that profits of China’s major industrial firms fell 14 percent from a year earlier in the January-February period.

The yield on the benchmark 10-year Treasury note was at 2.41 percent, unchanged from late Monday and still below the yield on the three-month Treasury bill, which many see as a warning sign of a possible recession.

U.S. stocks are on track to finish the quarter with solid gains at the end of this week. The benchmark S&P 500 index is up more than 12 percent so far in 2019, an unusually strong start to a year.

Still, uncertainty remains over how the U.S. and China will resolve their costly trade dispute and how a slowing global economy will affect corporate profits as companies begin to report results for the first quarter next month.

Trade talks are due to resume in Beijing on Thursday.

“The ability to strike an economically viable, mutually agreeable, politically acceptable, and commercially enforceable deal within a reasonably quick time will be put to the test,” Mizuho Bank said in a commentary. “Without obsessing over every minute detail, suffice to say that optimism over the potential for such a trade deal has been challenged by the ability to get both sides on the same page over a whole range of issues.”

ELSEWHERE IN ASIA: South Korea’s Kospi lost 0.2 percent to 2,145.62 and the Sensex in India climbed 0.3 percent to 38,345.90. Shares fell in Taiwan and Indonesia but rose in Singapore and Thailand.

ENERGY: Energy companies have been gaining as the price of U.S. crude oil hovers near $60 per barrel. U.S. benchmark crude added 6 cents to $60.00 per barrel in electronic trading on the New York Mercantile Exchange. It gained $1.12 Tuesday to $59.94 per barrel. Brent crude, the international standard, picked up 16 cents to $67.59 per barrel.