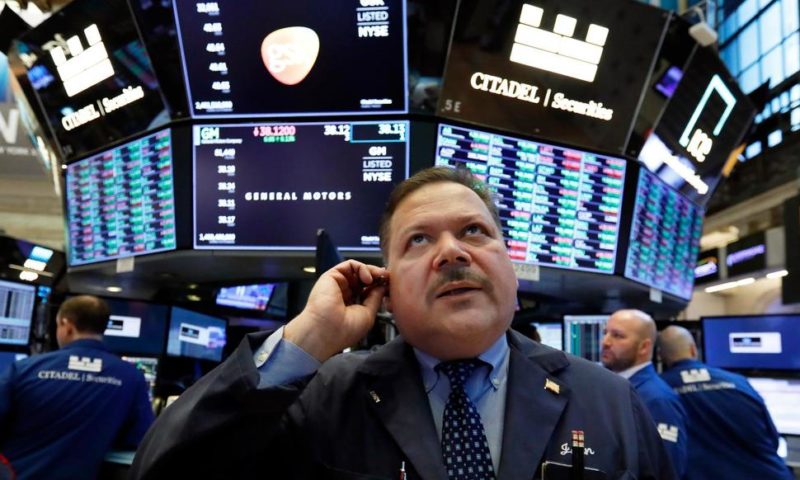 U.S. stocks capped a day of choppy trading with an uneven finish Monday as investors wrestled to make sense of newly pessimistic outlooks for the global economy.

U.S. stocks capped a day of choppy trading with an uneven finish Monday as investors wrestled to make sense of newly pessimistic outlooks for the global economy.

Traders also weighed another troubling drop in long-term bond yields, which many see as a warning sign of a possible recession.

Despite the market’s recent slide, the S&P 500 index is still up more than 11 percent so far in 2019, an unusually strong start to a year.

Stocks spent much of the morning wavering between gains and losses as investors weighed another downbeat outlook on the economy.

Citing a global slowdown and trade conflicts, economists from the National Association for Business Economics collectively project that growth will reach a modest 2.4 this year and just 2 percent in 2020.

That’s in sharp contrast to the Trump administration’s predictions that growth will accelerate in the coming years. Still, the economists say they think a recession remains unlikely any time soon.

Worried investors have shifted money into bonds, sending yields lower. The yield on the 10-year Treasury slid to 2.40 percent from 2.45 percent late Friday. At one point, the yield had fallen to 2.38 percent, briefly triggering deeper declines in the stock indexes.

The 10-year Treasury yield remains below the yield on the three-month Treasury bill, a worrying sign that in the past has preceded recessions. That “inversion” occurred on Friday and has spooked investors.

“Really, the things that are driving markets are the uncertainties about global growth and also about how the Fed is going to respond to the inversion of the yield curve,” Tilley said.

The market’s recent skid follows what has been a strong start to the year on Wall Street as stocks rebounded from a steep slide at the end of 2018. The bull market for U.S. stocks recently marked its 10th anniversary and is now the longest of all time.

Monday’s shaky start to the markets came amid a lull in news on the tariffs war between the United States and China. Trade talks are due to resume Thursday in Beijing.

U.S. stock indexes did not appear to have a significant move either way in response to news that the special counsel’s probe into Russian meddling in the 2016 presidential election concluded without finding evidence that the Trump campaign conspired or coordinated with Russia.

Attorney General William Barr issued a summary of the report Sunday, in which Special Counsel Robert Mueller did not find evidence that President Donald Trump’s campaign conspired or coordinated with Russia to influence the election. Mueller also reached no conclusion on whether Trump obstructed justice.

Still, the end of the Russia probe alleviates some reasons for concern in the market, said Tom Martin, senior portfolio manager with Globalt Investments.

“The Mueller report, at the margin, is a net positive for the market, as it removes some degree of uncertainty, although some uncertainty remains about what the various and ongoing investigations will turn up,” he said.

Apple’s splashy announcement of new offerings, including a subscription TV service due to launch in the fall, failed to impress investors. The stock slid 1.2 percent after the consumer electronics giant disclosed details of its forthcoming Apple TV Plus and other services, including subscriptions for games and news.

The company did not say how much Apple TV Plus, which will be ad-free, will cost or when exactly it will debut.

The new service will put Apple in direct competition with big streaming services including Netflix and Amazon Video. Apple is pushing digital subscriptions as it searches for new growth amid declining sales of its iPhones, long the company’s marquee product and main money maker.

American Airlines fell 1.2 percent a day after the company said it will be canceling about 90 flights a day through April 24. The airline has 24 Boeing 737 Max aircraft in its fleet.