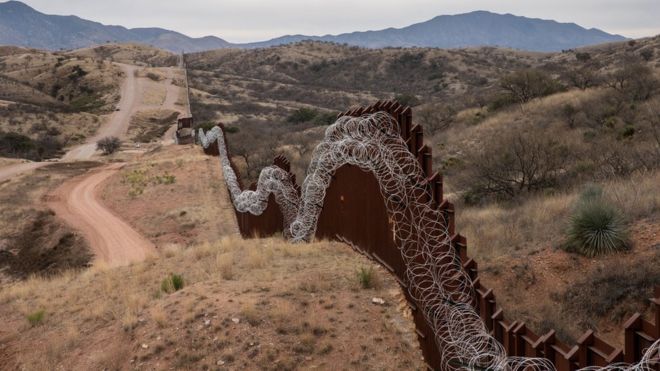 The Pentagon has authorised the transfer of $1bn (£758m) to army engineers for new wall construction along the US-Mexico border.

The funds are the first under the national emergency declared by President Donald Trump to bypass Congress and build the barrier he pledged during his election campaign.

Democrats have protested against the move.

The funds will be used to build about 57 miles (91km) of fencing.

President Trump has called the situation at the southern border a “crisis” and insists a physical barrier is needed to stop criminals crossing into the US. His critics say he has manufactured the border emergency.

A Pentagon statement said acting US Defence Secretary Patrick Shanahan had “authorised the commander of the US Army Corps of Engineers to begin planning and executing up to $1bn in support to the Department of Homeland Security and Customs and Border Patrol”.

The statement cited a federal law that “gives the Department of Defence the authority to construct roads and fences and to install lighting to block drug-smuggling corridors across international boundaries of the United States in support of counter-narcotic activities of federal law enforcement agencies”.

As well the 18ft-high (5m) “pedestrian fencing”, the funds will cover road improvements and new lights.

Democratic senators complained that the Pentagon had not sought permission from the appropriate committees before notifying Congress of the funds transfer.

“We strongly object to both the substance of the funding transfer, and to the department implementing the transfer without seeking the approval of the congressional defence committees and in violation of provisions in the defence appropriation itself,” the senators wrote in a letter to Mr Shanahan, CNN reported.

Mr Trump declared the emergency on 15 February after Congress refused his requests for $5.7bn (£4.4bn) to construct the wall. By declaring an emergency he sought to bypass Congress and build the wall with military funding.

The Democratic-controlled House of Representatives passed a resolution to overturn the emergency last month, and 12 Republicans later sided with Democratic Senators to get it through the Senate.

However, Mr Trump vetoed the resolution earlier this month.

Congress will now need a two-thirds majority in both chambers to override him, which correspondents say is unlikely to happen.