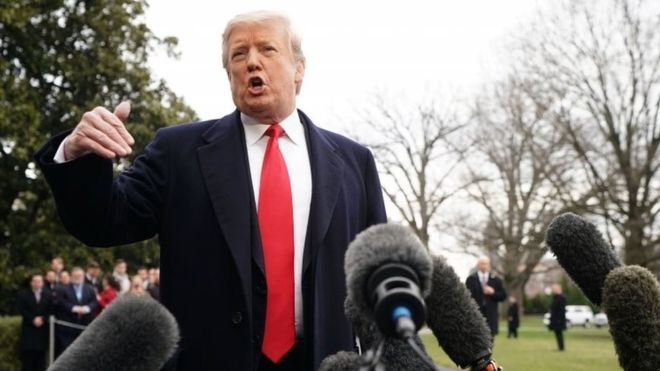 US President Donald Trump says he has ordered the withdrawal of recently imposed sanctions against North Korea.

In a tweet on Friday, he mentioned “additional large-scale sanctions” by the US Treasury that had been added to already existing restrictions.

It is believed he was referring to the treasury’s move on Thursday to blacklist two China-based shipping companies for reportedly violating sanctions against North Korea.

US National Security Adviser John Bolton described the treasury sanctions at the time as “important”.

In a tweet, he wrote that “the maritime industry must do more to stop North Korea’s illicit shipping practices”.

The US Treasury said it had acted because the companies had helped North Korea to evade international and US sanctions by engaging in ship-to-ship transfers with North Korean tankers or exporting North Korean coal.

Just hours after the announcement, North Korea withdrew from the inter-Korean liaison office. It is not known if the two events are connected.

The liaison office, located in the North Korean border city of Kaesong, had allowed officials from North and South Korea to communicate on a regular basis for the first time since the Korean War.

What did President Trump say?

In a tweet on Friday, Mr Trump wrote: “It was announced today by the US Treasury that additional large-scale Sanctions would be added to those already existing Sanctions on North Korea.

“I have today ordered the withdrawal of those additional Sanctions!”

White House Press Secretary Sarah Sanders did not elaborate on which sanctions were being referred to by the president.

However, she added: “President Trump likes Chairman Kim [Jong-un] and he doesn’t think these sanctions will be necessary.”

A generous move ahead of China talks?

It’s called the Trump administration for a reason…

The president’s advisers might carefully craft policy and give the reasons for actions in detail, but once again Donald Trump has shown that what matters is what he thinks…

On the face of it this does look like a pretty explicit attempt to reach out to Kim Jong-un, following the two leaders’ recent failed summit.

In emphasising how much Mr Trump “likes” Mr Kim, the White House statement appears designed to rekindle their relationship amid concerns about Pyongyang’s plans for North Korea’s nuclear programme.

But it is easy to argue that it also lessens the authority of those in Team Trump.

Only to be told 24 hours later by his president that in some cases they can.

The additional measures had been taken against two Chinese shipping firms, and US Treasury Secretary Steve Mnuchin is expected to travel to Beijing for crucial trade talks next week.

Perhaps China will see this as a generous move ahead of those discussions.

Or maybe it will be taken as evidence that in this White House a deal only really matters when it has been agreed with the president himself.