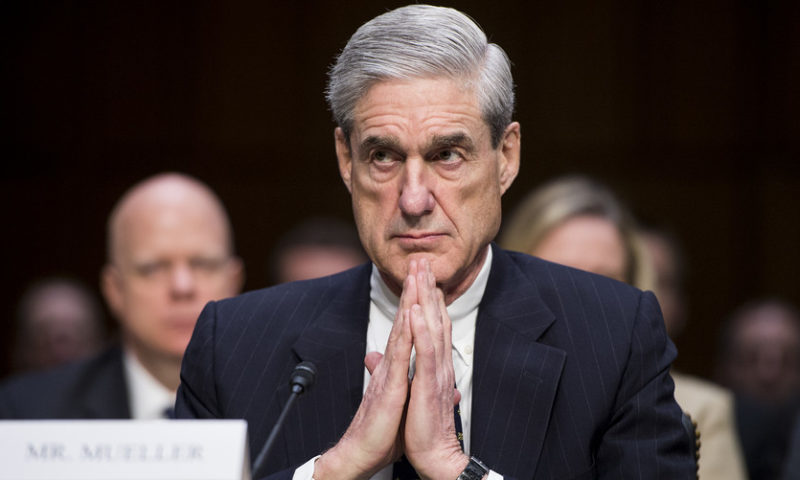 Investors have largely ignored the political drama that has accompanied the first two years of the Trump administration, but equity strategists and analysts say markets may soon have to deal with its ramifications, as Special Counsel Robert Mueller reportedly nears the end of his investigation into possible ties between the Trump campaign and Russia’s meddling in the 2016 election.

President Trump added to speculation over Mueller’s yet-to-be-submitted final report on the inquiry, when he endorsed the public release of the document on Wednesday.

The report could be a major and immediate driver of stock-market volatility, strategists said, if its conclusions incriminate the president in a direct manner. Trump has repeatedly denied allegations that his campaign aided Russia’s efforts to interfere in the election.

A report that’s damning toward President Trump would create a great deal of market uncertainty, put the administration’s tax and regulatory agenda at risk, and potentially encourage the president to take actions unfriendly to the market in an attempt to distract the public from the report’s contents.

That’s because “most people have priced in that there isn’t a lot of ‘there’ there,” he added, arguing that if there really were damning information, such as proof that Donald Trump coordinated with the Russian government’s effort to boost his election chances, that it likely would have come out already, given the media’s intense focus on the issue.

But if the report does include information so damning that it leads to erosion of support for Trump among the Republican Party’s base, “the market reaction would be bad,” Pavlick said, because it would create a great deal of uncertainty, put the administration’s tax and regulatory agenda at risk, and potentially encourage the president to take actions unfriendly to the market in an attempt to distract the public from the report’s contents.

It’s conceivable that Trump could “raise tariffs on China or impose auto tariffs on the EU just to change the conversation,” Pavlick said.

Outside of its combative stance on trade issues, the Trump administration’s policies, including the recent corporate tax cut and efforts to pare back federal regulations, have largely been seen as supportive of equity markets. The S&P 500 index SPX, +1.09% has risen roughly 33% since Election Day in 2016.

John Normand, head of cross-asset fundamental strategy at J.P. Morgan, concurred in a recent note to clients, writing that the Mueller report is a “significant wild card” that investors should brace for in the near term.

“Conclusions from the Mueller report so incriminating that the House initiates impeachment proceedings” would lead to higher volatility, he argued, though he placed the probability of such a scenario as “low to moderate.” He recommends that investments in gold GCJ9, +0.11% could help insure portfolios against the market reaction to an impeachment process “given its tendency to outperform when volatility rises.”

House Speaker Nancy Pelosi said earlier this month that, while she doesn’t think Trump is fit for office, she opposes impeachment, “unless there’s something so compelling and overwhelming and bipartisan” as to make impeachment imperative.

Brad McMillan, chief investment officer at Commonwealth Financial Network, agreed that an incriminating report could be a source of short-term volatility, but he argued that the immediate impact of the report wouldn’t put the administration’s business-friendly policies at risk.

“I’m not watching the report; I’m watching the Senate,” he said, arguing that evidence of any criminal activity on the part of the president would only be material to markets if it leads to 20 or more Republican senators favoring the president’s removal from office, a remote possibility given his strong support among the GOP base. Republicans hold 53 seats in the 100-seat Senate.

A president is impeached if a majority in the House of Representatives approves one or more articles of impeachment. Next, the Senate conducts a trial. A president would be removed from office if two-thirds of the Senate, or 67 senators, votes in favor of conviction. Only two presidents — Andrew Johnson and Bill Clinton — have been impeached by the House, and both avoided conviction in the Senate. Richard Nixon resigned in 1974 before facing an impeachment process that likely would have seen him removed from office.

Even if Trump were removed from office, however, that would result in Vice President Mike Pence taking over. “There won’t be a lot of daylight between Trump and Pence on policy, and if there’s a difference it would be a more market-friendly stance on trade,” McMillan argued.

The lasting effect of the report, therefore, may not materialize until closer to the 2020 elections, when the Democratic Party is seen as having a good chance of taking control of the Senate and retaining its House majority, as well as potentially winning the White House, especially if revelations from the Mueller report reduce the chances of the president getting re-elected, he said.

“Unified Democratic government could spook markets,” McMillan said, but, he conceded, it’s too early to tell what the Democrats’ policy agenda would look like.

There is an already crowded field competing for the Democratic Party’s nomination for president, and the process has been notable for the number of bold economic policies proposed by candidates including Elizabeth Warren and Bernie Sanders, including new financial transaction or wealth taxes, that observers say could hurt stock valuations.

Whether this willingness to propose such left-leaning policies captures the imagination of Democratic Party primary voters remains to be seen. “There are a lot of possible outcomes,” McMillan said. “If the nominee is Joe Biden, that’s one thing, [and] if it’s Elizabeth Warren, it’s totally different.”